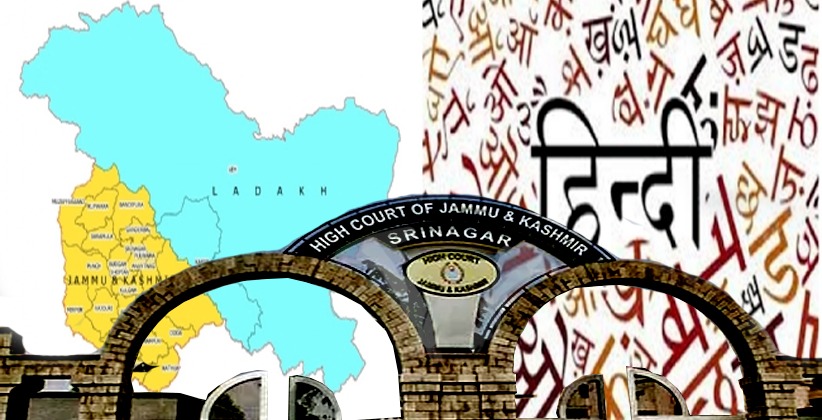 On Wednesday, 15th July 2020, a Public Interest Litigation (PIL) has been filed in Jammu and Kashmir High Court seeking directions to declare Hindi as the official language of the Union Territory arguing that the people of Jammu have been suffering from a language barrier.

The PIL, filed by Maghav Kohli through Advocate Aditya Sharma, said that Dogri and Hindi are the most widely used language in the province of Jammu, and added that Hindi remained a compulsory subject in all government and private schools.

The Plea further remarked, “This practice was prevalent in the erstwhile State of J&K and still exists in Jammu and Kashmir after the promulgation of the J&K Reorganization Act, 2019.” It further added, “That the people of Jammu province has become a constant victim of this language barrier which has been slapped over them by the administration because Urdu was never the mother tongue of the people of Jammu, and by making it an official language has resulted in causing unnecessary hardship for the people due to their inability to read, write and understand the language”

It claimed that this prejudice has been in place since the day of the accession of the Jammu and Kashmir to the Union of India and is still in effect even after the abrogation of Article 370 of the Constitution of India. The plea stated, “That in order to restore the parity amongst all the residents of the UT, the Government of India has rightly understood the long pending demand of the Jammu province to recognize Hindi as an official language and in order to substantiate their genuine claim a provision has been added under Section 47 of the J&K Reorganization Act, 2019.” The plea further added, “Once this provision has been added and recognized in terms of Section 47 it has become imperative on the administration to take effective steps in this direction by adopting /choosing any one or more official languages to the UT of J&K.”

Article 370 of the Indian Constitution gave special status to Jammu and Kashmir, a province located in the northern part of the Indian subcontinent, which was administered by India as a state from 1954 to 31 October 2019 and part of the larger Kashmir region. After 1947, that has been the subject of a dispute between India, Pakistan, and China, granting it the power to have a separate constitution, a state flag, and autonomy over the internal administration of the state.