“Journalists are entitled to protection against sedition,” says Supreme Court 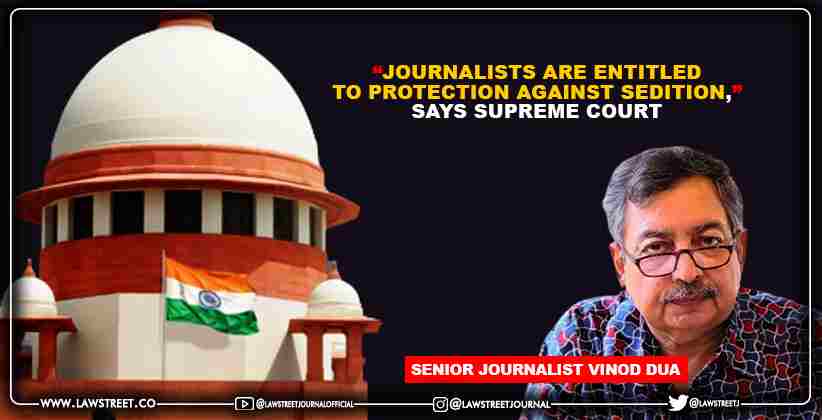 The Supreme Court of India on Thursday, June 03, 2021, quashed a sedition case registered against senior journalist and Padma Shri awardee Vinod Dua for his critical remarks against the Prime Minister and the Union government. The court affirmed that the “strong words” of disapproval against the ruling regime did not amount to sedition.

The court rejected the plea to direct State Governments to constitute committees to conduct preliminary inquiry before the FIRs are registered against senior journalists. The bench comprising of Justices UU Lalit and Vineet Saran observed that taking any measure as such would amount to encroachment upon the field reserved for the legislature.

However, the court clarified that, every journalist will be provided protection in terms of Kedar Nath Singh (1962) judgement, which said, “commenting in strong terms upon the measures or acts of government, or its agencies, so as to ameliorate the condition of the people or to secure the cancellation or alteration of those acts or measures by lawful means, that is to say, without exciting those feelings of enmity and disloyalty which imply excitement to public disorder or the use of violence is not sedition.”

The 1962 judgment said, Section 124A of the Indian Penal Code (sedition) was intended only to punish subversion of a lawfully established government through violent means.

The bench stated that the petitioner is asking the constitution of a committee completely outside the scope of statutory framework. After referring to various other subsequent judgements, the court observed, “we are conscious that the directions issued in Jacob Mathew had received approval by a Constitution Bench in Lalita Kumari, but those guidelines issued in Jacob Mathew stand on parameter which are completely distinguishable from the subsequent decisions of three Judge Bench of this Court in Union of India vs. State of Maharashtra and Others and in Social Action Forum for Manav Adhikar and Another vs. Union of India, Ministry of Law and Justice and others."