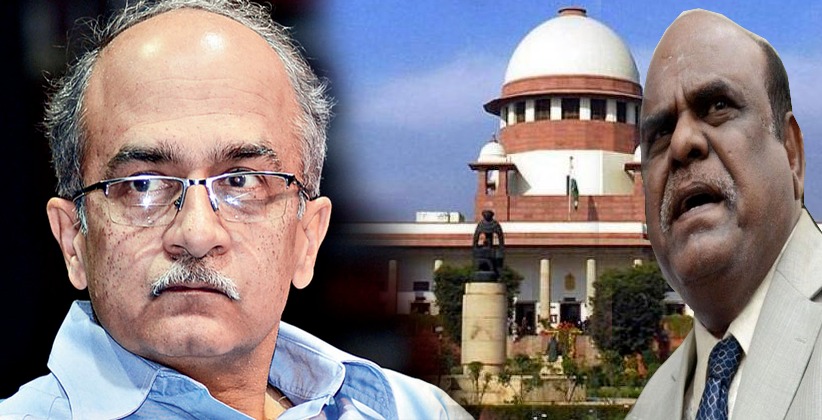 Ex Culcatta High court Judge, C.S. Karnan, who became the first judge to be held guilty for contempt of court in 2017, has described the proceedings of SC against Prashant Bhushan unconstitutional in an interview.

On 9 May 2017, a constitution bench of seven judges, led by then CJI J.S. Kehar has sentenced Justice Karnan for contempt of Court. The order came after a one-month stand-off between justice Karnan and the top court that saw the two sides were accusing each other and had passed an order against each other. In one order, Justice Karnan had sentenced CJI Kehar for life imprisonment under the SC/ST Act taking the cognizance of the issue against him.

In January 2017, Justice Karnan wrote a letter to Prime Minister alleging the sitting bench of Judges for corruption and due to these allegations against them, judges took Suo moto proceedings against him and declared him guilty in February. On March 10, the bench issued a non-bailable warrant against Justice Karnan and withdrew him from all his judicial work after Justice Karnan did not comply with the court’s order when he was asked to be present personally in the proceedings.

In an interview, Justice Karnan said that Bhushan just expressed his views about the conditions prevailing in the judiciary. He also said that Bhushan has exercised his rights to speech and expression and extended his support to Bhushan even though Bhushan was one of the lawyers who welcomed the court's decision in Justice Karnan’s Contempt of Court case.

After Justice Karnan was sentenced to jail for 6 months complying to the Court’s order, Bhushan Tweeted, “Glad SC finally nailed Karnan for gross contempt of court. He made reckless charges on judges & then passed ‘absurd’ orders against SC judges.”

But in a new Tweet, Bhushan reiterated his stand and said Justice Karnan, apart from making absurd allegations against his colleagues, had abused his judicial powers to jail top court judges.

Justice Karnan in the interview when asked about the Prashant Bhushan case said, “Judges are not above the law. They are equally answerable to the public as a member of the other institution. They are bound to follow the Indian Constitution and at the same time adopt a transforming working methodology. After all, they got their salaries from public taxes.”

However, Justice Karnan declined to share his view on the comment of Prashant Bhushan against him by saying that he was more concerned about the law. He also refused to comment on the lack of public outrage in his case, unlike the Bhushan’s case. He also said that when the parent law allows the free speech how can the judges prohibit it? According to him, the Indian Constitution binds everyone including the judges. He also faulted the reasoning by the court against Prashant Bhushan and said What Bhushan pointed out in his tweet were the facts.

He also said, “I wonder how Bhushan broke the law with his statement and also which part of his tweet has brought insult to ‘milords. In my case, they constituted a seven-judge bench but in this (Bhushan) it’s three-judge. There are some cases where two-judges' benches have heard contempt cases. This shows there is no fixed procedure followed to deal with contempt-of-court matters,” and by saying this he criticized the different yardsticks followed by the top court for proceedings of contempt of court cases.

Justice Karnan did not subscribe to the view taken by the three-judge bench led by Justice Arun Mishra in 2009 for the contempt of court against Prashant Bhushan, that it must hear argument on whether a citizen should go public with corruption allegations against judges, especially when there is an in-house mechanism to deal with such problems.

He also said, “I had made a complaint against 20 judges to the Prime Minister, who in return referred the complaint to Justice Khehar. On my complaint otherwise, an inquiry was mandatory. But the CJI chose to constitute a bench on the judicial side to act against me. Any criminal inquiry against a judge should be an open one. There should be transparency. The public has the right to know and must know what is happening in the judiciary.” he said this on the view that whether the in-house inquiries bore any result or action.