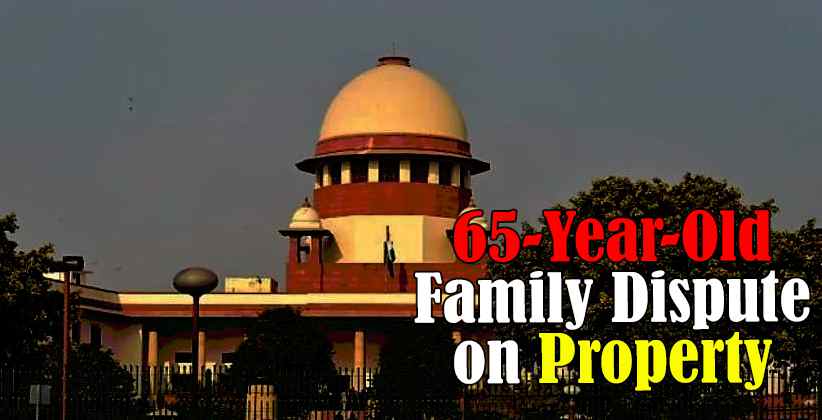 A dispute that ensued in the Naidu Family in the year 1955 due to a Will has finally been decided upon on July 17, 2020, by the Supreme Court. The apex court dismissed the appeals against the judgment of 2007 in the Madras High Court and upheld its decision in the matter.

The facts of the case were such- “Lakshmiah Naidu and Rangaswami Naidu were the sons of one R. Venkitusamy Naidu. Rangaswami was married to one R. Krishnammal and the couple had no issues. Lakshmiah had four sons, viz., Bakthavatsalam, Venkatapathy, Jagannathan, and Ramaswamy.”

The argument within the family began after the passing of Rangaswami Naidu in 1955. In a hearing under Section 145 of the Code of Criminal Procedure, 1898, the Magistrate was to resolve the altercation of possession between Rangaswami's widow and nephew on one side and Lakshmiah and his sons on another side. The first side was of the view that Rangaswami passed away after executing a Will. The Magistrate did not consider the Will, adjudging that the second side was to get the possession of the property.

But the altercation did not end there. In 1958, Krishnammal, the widow of Rangaswami brought the matter to court. The matter ended in a compromise. Disputes resurfaced when two persons named R. Alagiriswami Naidu and V. Kalyanaswami (family members) brought the case before the court again in 1963 and this also resulted in a compromise. Ramaswamy, son of Lakshmaih, and Krishnammal passed away in 1976 and 1977 respectively. After their demise, Alagiriswami Naidu filed for partition. Sub Judge, Coimbatore then ordered a partition.

In 1982, widow, daughters of Ramaswamy Naidu, and sons of Lakshmiah Naidu filed a matter before the court against A. Alagiriswami on the basis of some sale transactions done by him on the strength of a Will by Rangaswami Naidu. Nephews of Rangaswami Naidu and legatees under the will were the defendants other than A. Alagiriswami. The plaintiffs demanded a declaration of title and sought an injunction. R. Alagiriswami filed for partition as well in 1983.

The matters were heard together. According to the legal heirs of Lakshmiah Naidu, the Will was produced using methods involving undue influence and coercion. The suit filed by R. Alagiriswami was dismissed however the other was decreed. The first appellate court overruled the former suit. Then courts found no proof about a partition in 1932. Allowing appeal, the Madras High Court in 2007, backed the judgment of the trial court.

In 2008, many individuals appealed against the Judgment of the Madras High Court in the Supreme Court. The Supreme Court dismissed all the appeals, in a judgment that was held on July 17, 2020.

Section 145 CrPC proceedings were started due to the altercation between family members based on a Will that was assumptively made by Rangaswami Naidu.

The issue brought before the Trial Court in the 1982/1983 suits was related to the authenticity of the will.

The Trial Court found the will to be unauthentic and hence, not valid. Later, the first appellate found it valid. The High court found that the Will was not proved.

On July 17, 2020, judgment, the Supreme Court, discussed the law with regards to the proof of execution of a Will, at length, and then said: " We would arrive at the conclusion that the will was indeed executed by R. Naidu was his last will."

Though the highest court did not agree with the High Court judgment in relation to the authenticity of the Will, in the end, it backed the final conclusions that were pronounced which were on the basis of other aspects of the case.