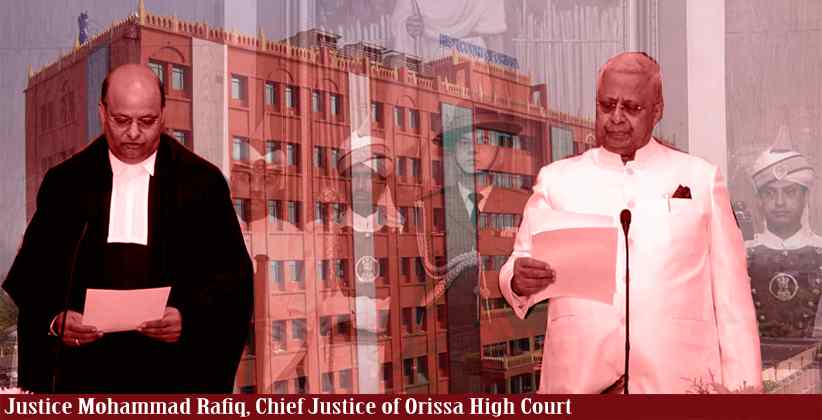 Justice Rafiq will serve as the 31st Chief Justice of the Orissa High Court situated in Cuttack.The Supreme Court Collegium had made a recommendation in this regard on April 18, 2020. After consultation with the Chief Justice of India, President Ram Nath Kovind transferred Justice Mohammad Rafiq from Meghalaya High Court on April 23, 2020.

The Orissa High Court had been functioning under the patronage of Acting Chief Justice Sanju Panda since January 5, 2020 following the retirement of Justice Kalpesh Satyendra Jhaveri before the current Chief Justice Mohammad Rafiq took oath.

Justice Rafiq, who was born in Sujangarh, Churu, is a graduate in law from Rajasthan University. He started his law practice as an advocate at the Bar Council of Rajasthan in 1984. He started his career as an advocate just after securing his LLB degree, but he continued to study further and secured his Master’s degree in 1986. He practiced exclusively in the Rajasthan High Court in almost all branches of law and especially conducted constitutional matters, service matters, land acquisition cases, land revenue cases, preventive detention cases, customs & excise matters, railway claims cases, tax matters, company matters and criminal matters before the High Court of Rajasthan situated in Jaipur.

Meanwhile, Justice Biswanath Somadder took oath as the Chief Justice of the Meghalaya High Court on April 27, 2020 as well.

Amidst Coronavirus Lockdown, The New Chief Justice Of Bombay High Court To Be Sworn In At a Small Ceremony As Former Chief Justice Retires.