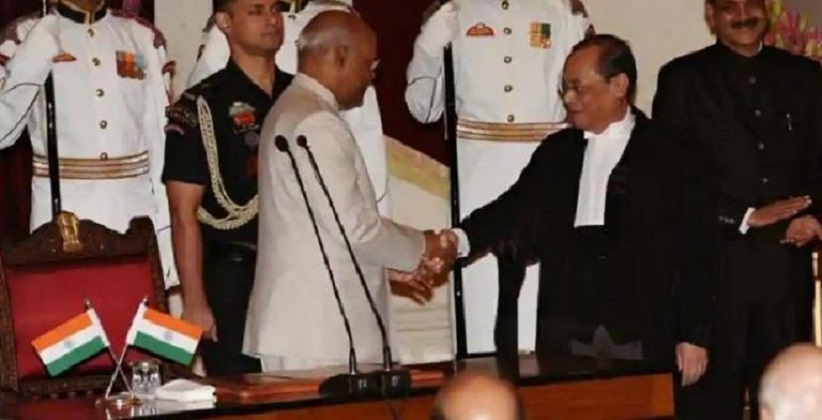 Justice Ranjan Gogoi today (October 3, 2018) swore in as the 46th Chief Justice of India. He took over from Justice Dipak Misra, whose tenure came to an end on October 2, 2018.

At a brief ceremony in Rashtrapati Bhavan’s Darbar Hall, Justice Ranjan Gogoi was administered the oath by President Ram Nath Kovind. He is the first judge from Assam to become the Chief Justice of India.

Justice Gogoi will have a tenure of a little over 13 months and will retire on November 17, 2019.

Justice Gogoi is the son of former Assam Chief Minister Kesab Chandra Gogoi. He joined the Bar in 1978 and practiced mainly in the Gauhati High Court, where he was appointed Permanent Judge on February 28, 2001. In September 2010, he was transferred to the Punjab & Haryana High Court, where he was elevated as Chief Justice on February 12, 2011. On April 23, 2012, he was elevated to the Supreme Court.

Earlier on September 26, 2018, a Bench of Supreme Court comprising of Chief Justice Dipak Misra, Justice AM Khanwilkar and Justice DY Chandrachud had dismissed a plea challenging the appointment of Justice Ranjan Gogoi as the next Chief Justice of India.  The Bench said that the issue did not need any interference of the court and dismissed it as “without merit”.

The petition had been filed by advocate RP Luthra, who contended that a press conference held on January 12, 2018, by four senior judges of the court, including Justice Gogoi, was a virtual revolt against Chief Justice Misra.

Justice Gogoi is likely to head the Bench or form a new Bench to hear Ayodhya dispute case, which is scheduled for hearing on October 29, 2018.

Dr. Avtar Singh, Veteran Author of Textbook on Law of Contract Passes Away