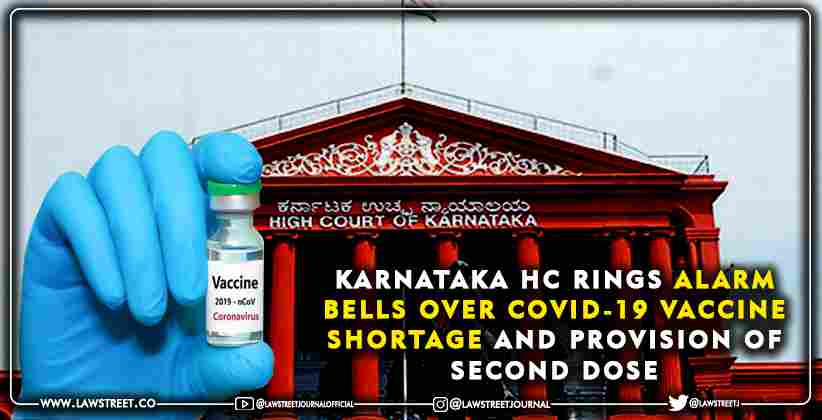 The Karnataka High Court on Tuesday, May 11, 2021 directed the state government to place on record a road map by Thursday (May 13, 2021) on how it proposes to provide vaccination to everyone in the state.

The court in its order noted, "We must record that it is a well-accepted fact that vaccination is a major step which is required to be taken to prevent the spread of covid-19. However, facts and figures brought on record show that the situation of availability of vaccines in the state of Karnataka is disturbing."

It added, "If the present scenario continues the vaccination drive will be completely ineffective in the state."

During the hearing the court orally said that "Vaccination is the only solution to prevent from third wave or any other wave. It is the obligation of the state to provide a vaccine. Nobody can purchase it from any shop."

As per guidelines, the time interval between two doses of the Covishield vaccine has been extended from four-six weeks to four-eight weeks. The second dose of Covaxin can be taken four to six weeks after the first.

On perusing the figures the court said, "Broadly it can be stated that 26 lakh beneficiaries in the state, to whom first dose of Covishield have been given have not received second dose which is overdue as per prevailing policy. As against this total stock of vaccines in the state as of today is 9, 37,780. We may hasten to add that the figures don't include those who have not completed four weeks after taking vaccination."

It added, "Hence, It is obvious that if the present scenario continues, the first dose of vaccination cannot be given to frontline workers and health workers and people belonging to the category of 45 years and above. As demand for those who have taken the first dose cannot be fulfilled in the near future. Thus, it can be concluded that if the present scenario continues the vaccination drive will be completely ineffective in the state."

Extending the time till Thursday, May 13, 2021 for the Central government to comply with the direction issued by it in its order dated May 6., the court noted, "We hope and trust that both governments will take a serious note of the desperate situation about availability of vaccines. If steps are not taken to procure an adequate number of vaccines, the very object of the vaccine will be affected and it will have a cascading effect on spread of covid-19."