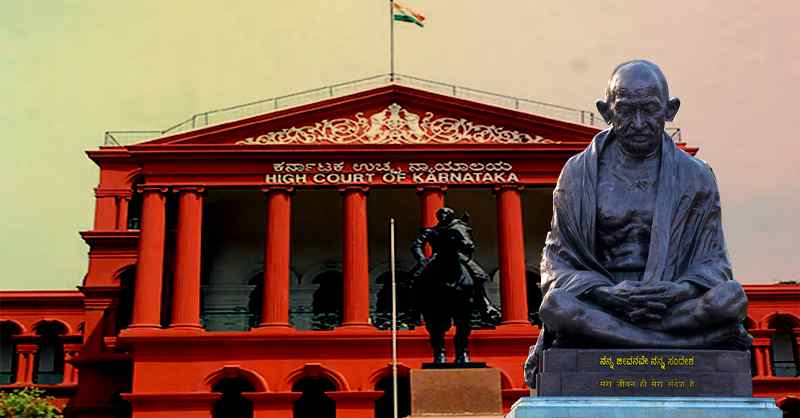 Karnataka High Court while dismissing a PIL held that Gandhi Statue is not a place of worship. The verdict came on 7th September 2020 when the petitioner, advocate A.V. Amarnathan contended that “Prayers are offered near the statue of the Father of the Nation, it will have to be held as ‘religious institution’.”

The petitioner filed a PIL (Public Interest Litigation) under Article 226 of the Constitution of India in the High Court of Karnataka for cancellation of the license given to Tonique Bar and Restaurant under Karnataka Excise (Sales of Indian and Foreign Liquors) Rules, 1968.

The petitioner argued that the definition of ‘Religious Institution’ under Sub-rule (3) Of Rule 3 of Karnataka Excise Licenses (General Conditions) Rules, 1967 will have to be considered as the statute of Father of the Nation is a place where people offer their prayers hence it is covered the ambit of ‘Religious Institutions’ of the said act. On this the two-judge bench of Chief Justice Abhay s. Oka and Justice N.S.Sanjay Gowda said that “By no stretch of the imagination, we can hold that the statue of Father of the Nation is a ‘religious institution’. The emphasis in Sub-rule (3) of said Rules of 1967 is on a place of public religious worship. It is impossible to accept that the statue of the Father of the Nation can be a ‘religious institution’. Secondly, if we look at the thoughts and the views propagated by the Father of the Nation during his lifetime, it is impossible to accept that his statue is a place of public religious worship. The Father of the Nation has a unique place. He was above all religions. He was truly a democrat who never liked human beings worshipped”.

The petitioner further said that the Statute of Father of the Nation, Lal Bhavan in Cubbon Park, a Church and the office of Deputy Commissioner of Police was situated with the 100m of distance which was a breach Rule 5 of the Karnataka Excise Licenses (General Conditions) Rules, 1967. On this, the bench said that on 9th July 2020 the HC ordered jurisdictional Tahsildar to carry out an exercise in order to measure the distance between the concerned places. Accordingly, a memo of compliance was filed by Additional Advocate on 27th July 2020 which includes a survey sketch, proving the distance between Tonique Bar and Restaurant and DCP’s office and the entrance gate of St. Martha’s Church is 126.50 meters and 144.00 meters respectively. The petitioner himself said that he was present under protest when the survey was being done, but the distance was measured in his presence, and since does not has any material on record to counter this, the distance is accepted as correct.

He further argued that the DCP confers the powers to reject and application for a license to run a liquor shop in a premise with a view to secure convenience, morality, tranquility, decency, or safety of the public or for any other reason since when the Sub-rule (2-A) of Rule 5 of Karnataka Excise Licenses (General Conditions) Rules, 1967 is examined it overrides Sub-rule (1) and (2) of the aforesaid act, but the petitioner has not filed the petitioner under the above-mentioned view.