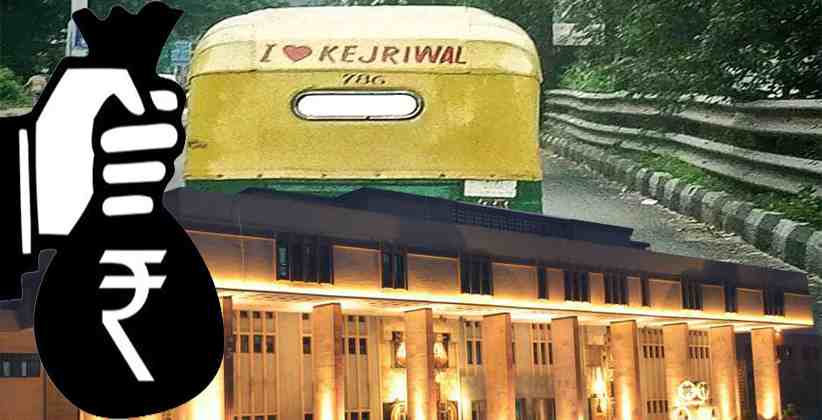 Auto Driver named Rajesh was issued challan of Rs. 10,000 on January 15, 2020 for displaying an ‘I love Kejriwal’ and ‘Sirf Kejriwal’ poster on his vehicle. For this reason, he filed writ petition in Delhi High Court for violation of his fundamental rights guaranteed under Articles 14, Article 19(1)(a) and Article 21 of the Constitution of India and to set aside challan.

On January 28, 2020 Justice Navin Chawla issued notice to the Delhi government, Police and Election Commission seeking their stand on the plea filed by Rajesh.

Rajesh said on January 15, 2020 that when he was driving auto bearing No. DL1 RU 2572 from Kalindi Kunj towards Apollo Hospital, he was fined by the traffic police and illegally challaned for permit violation under Section 6 (1)/192A of The Motor Vehicles Act, 1988.

He said he had put the posters and banners somewhere in Sept and Oct in 2019, on his own will and without any allurement or coercion from any political party.

Election commission in its submission has said that such type of political party advertisement is prohibited as elections are scheduled on 8 February, 2020.

To which auto driver’s lawyer opposed by saying that this was not a political advertisement and even if it was, it would not be prohibited as it was displayed at the petitioner's expense and not by a political party.

He also said that political advertisements were permitted on the rear, right and left sides of public service vehicles, including autos, under guidelines regarding this issued by the Delhi government in 2018.

The auto driver has claimed that the action was taken without any advance notice by any government department prohibiting such a display. It is just out of malice political motives.

The lawyer for the Delhi government and police told the court that time was required to examine why the challan for Rs. 10,000 was issued.