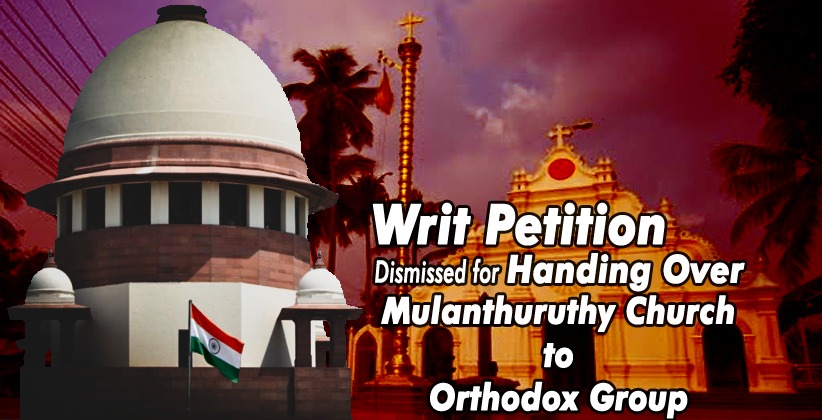 On Wednesday (28 October 2020), the Supreme Court dismissed a writ petition filed against the order of the High Court of Kerala, directing the handing over of Mulanthuruthy Church to the Orthodox faction in the latest development in the feud between Jacobite and Malankara Orthodox faction.

Two persons belonging to the Jacobite group, Santosh Mathai and Roy Thomas, filed the petition and contended that the directions issued by the High Court on May 19 to the Ernakulam District Collector about handing over the keys of the Church to the Orthodox faction violated the fundamental right to religion and conscience under Article 25 of the Constitution.

Petitioner’s lawyer, Advocate Mathews Nedumpara was asked by the bench headed by Justice Ashok Bhushan that how a writ petition under Article 32 of the Constitution of India was maintainable against a judicial order and therefore, the bench termed the writ petition as “misconceived” and proceeded to dismiss it.

A judgment delivered by the Supreme Court in July 2017, in the case of KS Varghese and Ors. V. Saint Peter’s and Saint Paul’s Syrian Orthodox Church about handing over of the 800-year-old Church to the Orthodox faction which settled the century-long dispute between Jacobite and Malankara Orthodox factions. In this case, the Supreme Court upheld the validity of the 1934 Constitution of the Malankara Orthodox Syrian Church to govern the parishes under the Church.

The verdict impacted over 1000-odd churches and came on the dispute over the ownership of two Churches. From the Supreme Court verdict, many Churches under dispute have been already handed over to the Orthodox group despite stiff resistance from the bishops and laymen from the Jacobite Church. In 2019, the bench headed by Justice Arun Mishra held that no court should pass any order to reopen the issues that are settled in the KS Varghese case judgment. A bench headed by Justice Arun Mishra dismissed another petition in June 2020, which sought clarification on the 2017 judgment.