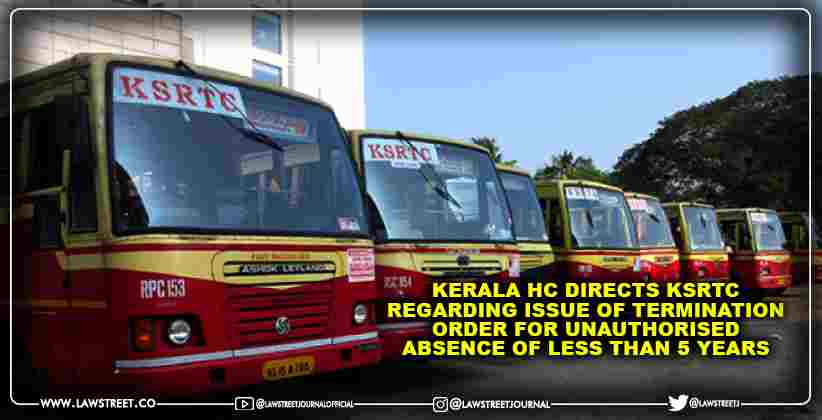 While disposing off a writ petition filed by a KSRTC driver for wrongful termination from duty, the Kerala High Court stated that Rule 24 of the Kerala Service Rules, cannot be invoked in case of unauthorised absence of less than five years.

Sajesh NT filed the petition following an order issued by the Executive Director of KSRTC dated 01. 10.2018 the petitioner from service invoking the power under Rule 24.

The petitioner entered service in 2013, but owing to his mother's illness, had applied for leave from 18.07.2017 to 31.12.2017. However, he could not join duty after expiry of leave due to the spread of Nippa epidemic in the locality. This was informed to the office of the respondents, stated the petition.

Also Read - "No Stipulation that Cancellation Deed Has to be Done at the Same Place Where Trust Deed was Registered": Kerala High Court [READ JUDGMENT]

Since he did not receive a positive response after contacting the District Transport Officer seeking one week's time to join duty, the petitioner sent a representation on 02.06.2018, explaining the circumstances which prevented him for reporting for duty on the said date. Despite this, the petitioner was removed from service.

Adv. N. Sasidharan Unnithan while arguing for the petitioner alleged that KSRTC did not consider the leave application while calculating the duration in which the petitioner failed to report for duty. More importantly, the respondents could not have invoked Rule 24 since the unauthorised absence did not cross 5 years.

The court held that the power under Rule 24 cannot be invoked in case of unauthorised absence of less than 5 years, in two recent judgements, one of these decisions were delivered by a Division Bench.

The single bench comprising of Justice TR Ravi observed that in the light of the cited authoritative pronouncement by the Division Bench of the court, the said order is liable to be set aside.

The Court thereafter directed the authorities to reinstate the petitioner in service with all benefits. The Bench clearly mentioned that the respondents are free to initiate any action against the petitioner under the provisions of Kerala Civil Services Rules.