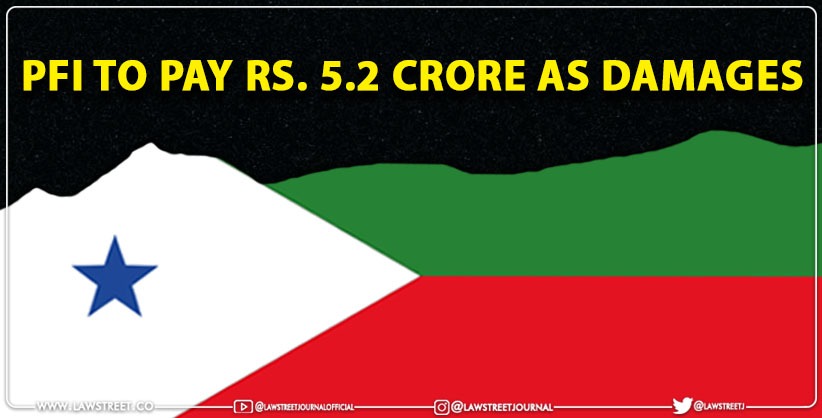 NEW DELHI: Days after country-wide crackdown, the Kerala High Court has directed the Popular Front of India, now proscribed, to deposit Rs 5.20 crore for damages caused of their "illegal acts" of calling flash hartal on September 23 in the state, saying citizens cannot be made to live in constant fear because they don't have might of such organisations and it is the rule of law and not the rule of mob which would govern the country.

"We are of the firm view that the 12th and 13th respondents are wholly and directly responsible for the injuries inflicted on the members of our citizenry by their supporters, as also for the damage/destruction caused to public/private property by the said persons," the bench said.

The court also castigated the Kerala police for failing to contain the situation.

"It is of some concern that notwithstanding our declaration that the very calling of a flash hartal was an illegal and unconstitutional act, the State Administration did virtually nothing to prevent the hartal organisers from going ahead with their illegal demonstrations and incidental road blockages on 23.09.2022. The media reports also reveal that the police force played only a passive role in dealing with the situation," the bench added.

In strong observations, the High Court said, "Citizens of the State cannot be made to live in fear solely because they do not have the organised might of the persons or political parties at whose instance such violent acts are perpetrated. Our constitution guarantees to each individual in society certain fundamental rights, and the said rights are to be respected and guaranteed not only by the State as a governing body but also by fellow citizens who must view such respect for others’ rights as partof their fundamental duties under the constitution. It might be apposite to emphasise at this juncture that Article 51-A (e) in Part IV-A of our Constitution, obliges every citizen to promote harmony and spirit of common brotherhood amongst all the people of India transcending religious, linguistic and regional or sectional diversities and to renounce practices derogatory to the dignity of women, while Article 51-A (i) obliges every citizen to safeguard public property and to abjure violence. A citizen of our country cannot therefore, either individually or collectively, ignore the above constitutional mandate. It is the rule of law, and not the rule of men or mobs that legitimises governance under our democratic Constitution."

In a stringent direction, the High Court also directed all courts that bail in hartal-related instances should only be granted after reparation amounts are deposited in those particular incidents.

It is to be noted that around 2,050 persons were arrested, and about 420 cases were registered in Kerala in connection with the strike.

Sattar had called for the hartal in protest against the arrest of PFI leaders in a nationwide operation of NIA on September 22.

The HC had Suo Motu registered the case in view of the strike call.

The HC directed PFI and Sattar to deposit Rs 5.20 crore to the state home secretary within two weeks. In case of failure, revenue recovery proceedings would be initiated against them.

The Kerala State Road Transport Corporation had informed the HC that it suffered losses worth Rs 5.02 crore due to trip cancellations and physical damages.

Rape To Include Marital Rape For Purpose Of MTP Act: SC