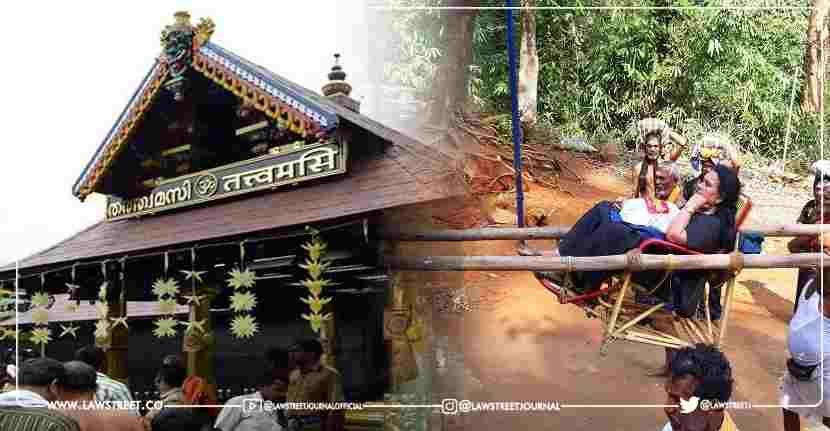 The High Court of Kerala found that contract carries flouted road safety standards and lightening specifications and therefore pose a potential threat to the safety of passengers and other road users.

In the view of increasing accidents involving ‘Sabarimala Pilgrims’ travelling in buses and other contract carriers, the Kerala High court recently issued a slew of directions to ensure road safety and compliance with the provisions of the Motor Vehicles Act,1988.

A Division Bench of Justices Anil K Narendran and PG Ajithkumar found that the contract carriers were being permitted to run on public roads flouting road safety standards and lightening specifications that would disturb the concentration of drivers thereby posing a potential threat to the safety of passengers and other road users.

The judgment was issued on a matter taken up the High Court on its own, based on a report by the Special Commissioner, Sabarimala, regarding the functioning of the safe zone project there.

The project 2021-22 has been operational from the commencement of Mandala Makaravilakku festival for the current year on November 15, 2021 and reportedly has received ₹20 lakh out of an allotted sum of ₹68 lakh.

The report stated that the safe zone project has so far attended to 40 major accidents, 758 major break downs and 536 minor break downs.

The High Court noted from images of one of the accidents that occurred recently that various objects were been placed/hung in front of the windscreen of the contract carriage, causing obstruction to the clear vision of the driver to the front.

The vehicle then rammed into the rear of a tempo traveler that was then pushed forward running over and killing two passengers standing on the road. Both were Sabarimala pilgrims.

Other images showed vehicles fitted with after-market multi- coloured LED/laser/neon lights, flash lights, etc., capable of dazzling the drivers of other vehicles, pedestrians and other road users which resulted in horrifying accident images.

Further, the High Court deemed it necessary to issue several directions to ensure compliance with road safety guidelines by way of this judgment. It directed the Transport Commissioner and the State Police Chief to file an action-taken report on the directions issued by the Court by July 2022.

The High court issued the following directions to the Transport commissioner and the State Police Chief and the various officers under them.

In the view of the law laid down in various cases by the Kerala High Court, and since use of such vehicles in Public place, floating the standards in relation to road safety is likely to endanger the safety of the passengers of such vehicles and also other road users, said officers shall prevent the use of contract carriages and other transport vehicles in public places:

In view of the provisions under Section 206(4) of the MV Act, a police officer or other person authorized in this behalf by the State Government shall seize the driving license held by the driver of a motor vehicle who has committed an offence under Section 190 and forward it to the licensing authority for disqualification or revocation proceedings under Section 19.

A transport vehicle governed by AIS-008, which is not installed with lighting and light-signalling devices and also retro-reflectors conforming to the individual specifications, cannot be granted fitness certificate, since such a vehicle cannot be treated as a vehicle which complies with the provisions of the Motor Vehicles Act and the Rules made thereunder, for the purpose of grant of certificate of fitness.

The certificate of fitness granted to such vehicle shall be cancelled by the prescribed authority, in accordance with the provisions under Section 56(4) of the MV Act.

In appropriate cases, the registering authority shall initiate proceedings to suspend or cancel the letter of authority granted or renewed under Rule 63(5) of the Central Motor Vehicles Rules or forfeit security deposit, after affording the holder of letter of authority an opportunity of being heard.