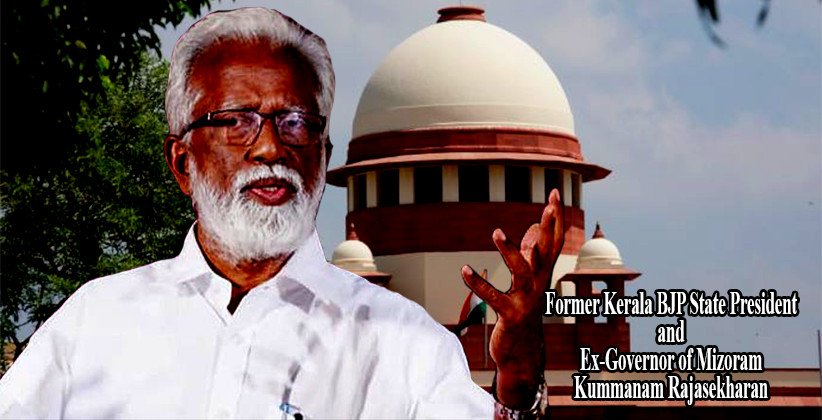 On January 14, 2020 the state of Kerala had challenged the Union legislation - the Citizenship (Amendemet) Act (CAA), 2019 under Article 131 of the Constitution of India, 1950. Now yesterday on January 17, 2020 former Kerala BJP state president and ex-Governor of Mizoram Kummanam Rajasekharan has filed an impleadment application in the Supreme Court and challenged the maintainability of the suit filed by the Kerala Government. Besides him, there is also a 2nd applicant named Ajikumar who is a social worker. Both the applicants are registered voters in Kerala.

They have mentioned in the application that they are aggrieved by the action of the petitioner (State of Kerala) as they have filed a petition without considering the majority view of the people of Kerala and it will burden the public exchequer unnecessarily.

They alleged that the petitioners have listed the minorities who have not been included from the Pakistan, Afghanistan and Bangladesh as well as other neighbouring countries, but have failed to prove or give any record of how they are facing persecution.

It is pleaded in the application that there is no need to invoke the original and exclusive jurisdiction of the Supreme Court as the situation isn’t so grave and there is no “legal dispute,” if there is a dispute then it is “political dispute”.

To substantiate this argument, they cited ‘State of Karnataka v. Union of India’ [1978 SC 68] in which SC has held that the dispute must involve a question relating to a legal right and not a political right. They also argued that the petitioners haven’t made out any substantial case which will show that through CAA, existing legal rights and the liberty of the State of Kerala or its inhabitants are affected.

It is further alleged that the petitioners have filed the suit without even consulting the executive head of the state, namely the Governor. In reality the Governor has openly declared that the Act is “perfectly constitutional”.

They also contended that they have made out a prima facie case of violation of their right and requested the Court to implead them in the suit.

There is no notice or order as to the application. The matter has been adjourned.