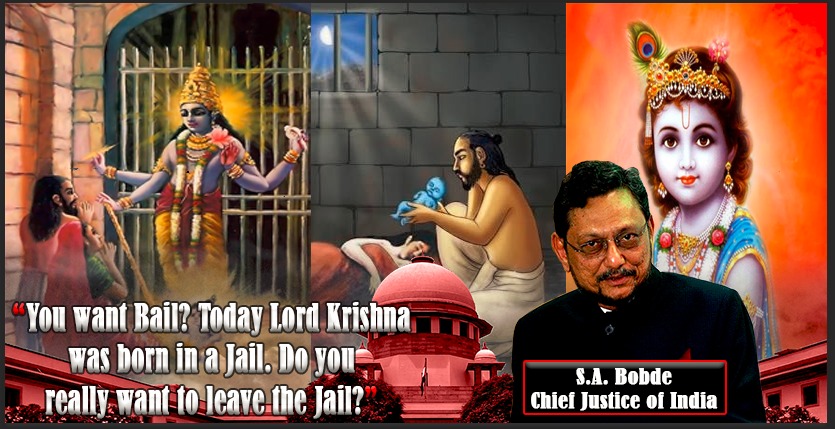 On August 11, 2020, CJI Mr. Sharad Arvind Bobde in a hearing of a Bail plea before the Supreme Court asked the convict why does he want a bail on the occasion of Janmashtami, while Lord Krishna is believed to born inside a jail on this day? The Supreme Court was hearing a case of Dharmendra Valvi, who was convicted and sentenced to life imprisonment for committing a murder.

The petitioner’s lawyer answered affirmatively. In reply, CJI said that ‘it is good that you are not extremely attached to any religion, and the Bail is granted.’

He (Dharmendra Valvi) is a Congress Party leader and other 5 party workers were accused of murdering another political leader from Bhartiya Janta Party (BJP) in 1994. All the 6 accused were sentenced to life imprisonment by the Sessions Court and the Judgment was upheld by the Aurangabad Bench of Bombay High Court in 2017. Then, the accused made an appeal in the Supreme Court for the same, and since then the case is being pending in the Supreme Court, and on August 11, 2020, Dharmendra Valvi was granted Bail by the current CJI S.A. Bobde.

While granting the bail, the Supreme Court directed that “During the pendency of the main appeal, the appellant, Dharmendra Valvi is directed to be released on bail on furnishing bail bonds in the sum of Rs 25,000 with two sureties of the like amount.”

CJI was impressed by the convict when he denied the option to remain in the Jail in the name of God. This way, CJI has again proved his unique sense of humor at the Supreme Court. Earlier, the pictures of the CJI went viral when he rode a Black Harley Davidson in Nagpur City.