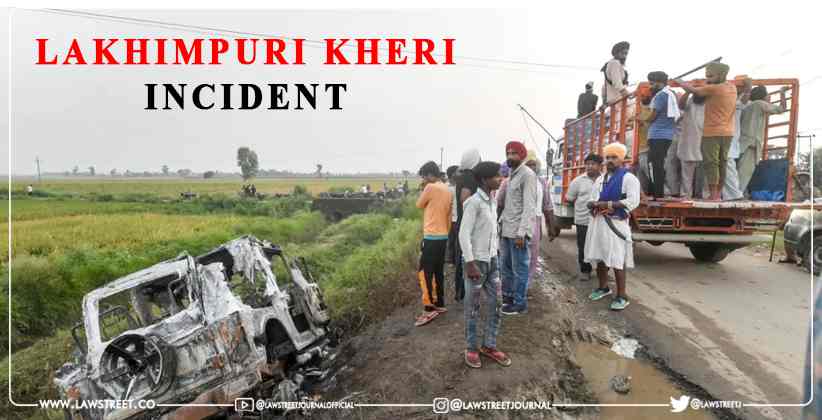 On March 4, 2022, the Supreme Court decided to hear a special leave petition on March 11 , 2022  submitted by family members of farmers killed in the Lakhimpur Kheri incident, challenging the Allahabad High Court's grant of bail to Ashish Mishra, son of Union Minister Ajay Mishra.

Advocate Prashant Bhushan requested that the matter be brought before the Chief Justice of India on an urgent basis.

Bhushan pointed out that other defendants in the case have petitioned the High Court for bail based on relief granted to Mishra.

“I can list on 11th only. Other judge has to be available", CJI NV Ramana said. When Bhushan urged the CJI to pass an order against High Court granting bail to other accused based on Ashish Mishra's order, the CJI said "File Memo before HC saying we're taking this matter on 11th”.

The impugned order is perverse, according to the petitioners, because the charge sheet in the case was filed on 03.01.2022, but the bail applicant did not bring it to the High Court's attention, and the High Court did not consider or deal with the overwhelming evidence against the accused in the charge sheet.

According to the petition filed by Advocate Prashant Bhushan, the absence of any discussion in the High Court's order as to the settled principles for grant of bail is attributable to the State's failure to make any substantive submissions to this effect, as the accused has significant influence over the State government because his father is a Union Minister from the same political party that governs the State.

Also, the petitioners argue that the High Court's comment that "there might be a potential that the driver tried to speed up the vehicle to save himself, as a result of which the incident occurred" is perverse, especially when there is no evidence to support this claim.

Furthermore, the petition claims that there is evidence in the charge sheet to the contrary, claiming that the vehicles were speeding at high speeds of 70-100 km/h from the time they left the 'Dangal, when they passed the petrol pump, when they crossed the police crossing, all the way to the crime scene, as attested to by various eye witnesses, including police officers on duty.

Primarily, Mishra was charged in connection with an incident that occurred on October 3, when several farmers were opposing the visit of Uttar Pradesh Deputy Chief Minister Keshav Prasad Maurya to the Lakhimpur Kheri area, and four protesting farmers were killed when an SUV mowed them down.

The SUV was allegedly part of the convoy of Ajay Kumar Mishra (Ashish Mishra's father), Union Minister of State for Home Affairs and BJP MP. Following that, the police filed a first information report under Section 302 IPC[1] against Ashish Mishra (son of Minister Ajay Kumar Mishra) and several others in connection with the murder case.

It should be mentioned that the Uttar Pradesh police's Special Investigation Team, which is investigating the Lakhimpur Kheri violence incident, testified before the Lakhimpur municipal court in December that there was a concerted conspiracy to kill those present during the incident.

“It appears from the probe that has been conducted and material collected till now that the said act wasn't a negligent act committed by the accused, rather, it was done intentionally as per premeditated plan to kill..., the application filed by the Special Investigation Team avers”

Justice Rakesh Kumar Jain, a retired judge of the Punjab and Haryana High Court, was appointed by the Supreme Court in November 2021 to oversee the investigation into the Lakhimpur Kheri riots.

This judgement was issued by a bench led by Chief Justice of India NV Ramana, which is hearing a Public Interest Litigation (PIL) filed on the basis of a written petition sent by two lawyers requesting an impartial investigation into the October 3 Lakhimpur Kheri violence.

302. Punishment for murder.—whoever commits murder shall be punished with death, or 1[imprisonment for life], and shall also be liable to fine.

279 [304A. Causing death by negligence.—whoever causes the death of any person by doing any rash or negligent act not amounting to culpable homicide, shall be punished with imprisonment of either description for a term which may extend to two years, or with fine, or with both.]

279. Rash driving or riding on a public way.—Whoever drives any vehicle, or rides, on any public way in a manner so rash or negligent as to endanger human life, or to be likely to cause hurt or injury to any other person, shall be punished with im­prisonment of either description for a term which may extend to six months, or with fine which may extend to one thousand rupees, or with both

338. Causing grievous hurt by act endangering life or personal safety of others.—Whoever causes grievous hurt to any person by doing any act so rashly or negligently as to endanger human life, or the personal safety of others, shall be punished with impris­onment of either description for a term which may extend to two years, or with fine which may extend to one thousand rupees, or with both.

307. Attempt to murder.—Whoever does any act with such intention or knowledge, and under such circumstances that, if he by that act caused death, he would be guilty of murder, shall be punished with imprisonment of either description for a term which may extend to ten years, and shall also be liable to fine; and if hurt is caused to any person by such act, the offender shall be liable either to 1[imprisonment for life], or to such punishment as is hereinbefore mentioned. Attempts by life convicts.—2[When any person offending under this section is under sentence of 1[imprisonment for life], he may, if hurt is caused, be punished with death.

[(3) Whoever sells or transfers any firearm, ammunition or other arms—

(i) without informing the district magistrate having jurisdiction or the officer in charge of the nearest police station, of the intended sale or transfer of that firearm, ammunition or other arms; or

(ii) before the expiration of the period of forty-five days from the date of giving such information to such district magistrate or the officer in charge of the police station, in contravention of the provisions of clause (a) or clause (b) of the proviso to sub-section (2) of section 5, shall be punishable with imprisonment for a term which may extend to six months, or with fine of an amount which may extend to five hundred rupees, or with both.]