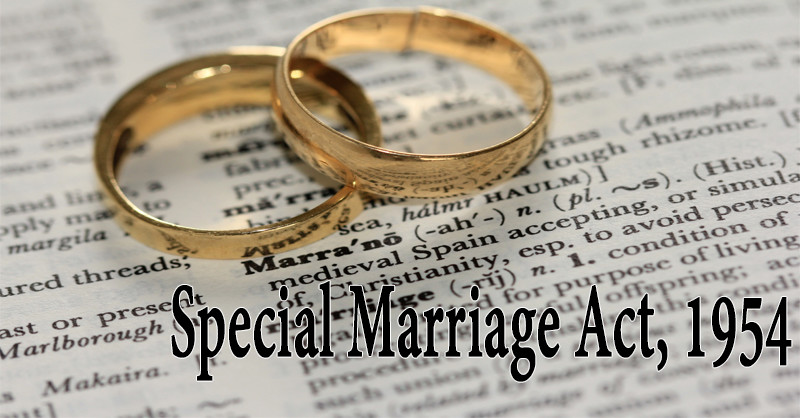 A writ petition has been moved before the Supreme Court on Thursday challenging the constitutional validity of some provisions of the Special Marriage Act, 1954 where it requires the Marriage Officer to publish personal details of the two adults in the public domain for scrutiny before their marriage.

The PIL is filed by a Kerala-based law student, Nandini Praveen, through AOR Nishe Rajen Shonker and Advocate Kaleeshwaram Raj, who argued that these provisions of the Special Marriage Act, 1954 are violative to the fundamental rights under article 14, article 19, and article 21. "Publication of personal details often might have a chilling effect on the right to marry. In other words, couples are asked to waive the right to privacy to exercise the right to marry. This infringes the rights of autonomy, dignity, and the right to marry, of various couple", the petition reads.

The petitioner contends that the requirement of notice before marriage, which is absent in the Hindu Marriage Act and customary laws in Islam violates the right to equality of the parties under articles 14 and 15 of the Indian Constitution. It also argues that provisions to publish personal information of the individuals for public scrutiny damage one's right to have control over their personal details. "The right to privacy is held to be an aspect of the right to life under Article 21 of the Constitution, as reiterated in many judgments (including Aadhaar verdict) this court has held that informational privacy needs to be protected as a facet of privacy right", the plea said.

While highlighting few other alleged unconstitutional provisions of the Act the plea states that the section 5 of the Act requires the parties who intend to marry to give notice to the Marriage Officer of the district where at least one of the parties to the marriage has resided for a period of not less than thirty days immediately preceding the date on which such notice is given. Following this, section 6 provides that all such notices shall be entered in the official records and the Marriage Officer is expected to publish each notice by affixing a copy thereof to some conspicuous place in his office. "Publishing details of notice of marriage by the marriage officers include the details of the parties like names, date of birth, age, occupation, parents' names and details, address, pin code, identity information, phone number, etc. This is a peculiar requirement of the Act”, the petition states.

Moreover, as per Section 6(3), if the parties are not permanent residents within the jurisdiction of the officer as mentioned in section 5, a copy shall be transmitted to cause its publication in the relevant marriage office.

The plea sought striking down of sections including 6(2), 7, 8, and 10 of the Special Marriage Act, 1954 contending that these provisions are as "unjust, illegal and unconstitutional" against interfaith couples, and the conditions imposed by the Act violates the principle of fundamental choice of the couples as observed in the Navtej Singh Johar judgment.

Further, the petitioner also referred to the Delhi High Court judgment in Pranav Kumar Mishra vs. Govt. Of NCT. Of Delhi where it was noted that "the unwarranted disclosure of matrimonial plans by two adults entitled to solemnize it may, in certain situations, jeopardize the marriage itself. In certain instances, it may even endanger the life or limb of one at the other party due to parental interference".