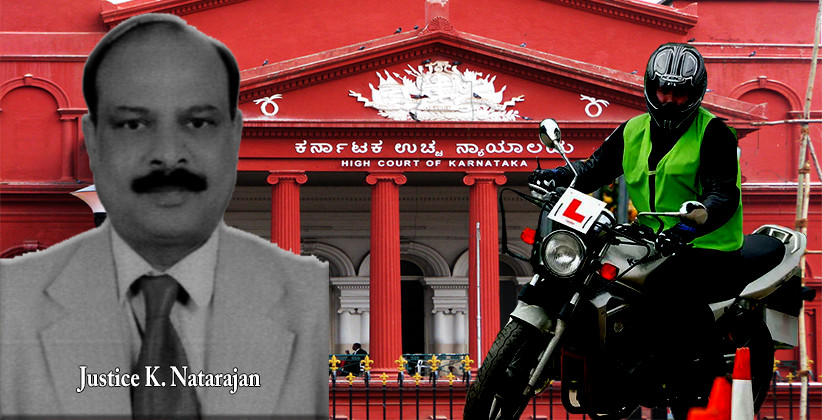 The Karnataka High Court on August 21, 2019, in the case of The Senior Divisional Manager, The National Insurance Co. Ltd. v. Shri Jyotiba Appaji Shigate has held that learners license issued by a competent authority is a valid license and a rider or learner need not accompany any instructor for a motorcycle, as is required in case of a car.

The observation was made by a single judge bench of Justice K. Natarajan while rejecting the plea filed by Insurance Company challenging claim awarded by Motor Accident Tribunal to the family of a deceased woman.

On May 29, 2009, wife of the claimants, Mangala was proceeding as a pillion rider on the motorcycle bearing registration No. KA 22/EB-9566 driven by Anjana and when the said vehicle reached near Bokanur Cross on Belgaum-Belgundi road, Anjana rode the motorcycle in a rash and negligent manner with high speed due to which the accident occurred. Mangala fell down from the motorcycle and sustained injuries. During treatment, in-hospital she succumbed to the injuries.

The deceased was working as headmistress in a Government Primary Marathi School and was earning Rs.30,000 per month and she was also income tax Assessee. She was maintaining her entire family. Therefore, claimants prayed for awarding compensation on various grounds to the tune of Rs 30 lakh.

The Motor Accident Tribunal after hearing the matter awarded the compensation of Rs.12,65,731 to the claimants. Assailing the judgment and award passed by the Tribunal, the Insurance Company filed this appeal challenging the liability fastened as well as for reduction of quantum of compensation.

As per the provisions of Sub-Rule (1) of Rule 3 of the Central Motor Vehicle Rules, 1989, (for short "the Rules"), she has to mention the English letter 'L' on the motorcycle and without instructor riding of the motorcycle by a learner would amount to violation of conditions of the insurance policy and there is a fundamental breach in the terms and conditions of the policy. But, the Tribunal committed an error in fastening the liability on the Insurer and the liability ought to have been fastened on the owner of the motorcycle.

As regards the calculation of the compensation amount. It was argued "Only 25% of the income shall be considered for computing compensation towards loss of dependency for the second claimant (minor son), as husband is working. The split multiplier shall be applied in this case, as the deceased was permanent employee, a teacher, who would retire from her service within five years and the entire salary cannot be considered as loss of dependency after retirement."

Further, "In respect of quantum of compensation and submits though the deceased was headmistress and since she was earning member, it cannot be considered that the first claimant was not at all dependant on his wife merely because he is also an employee and earning."

The court said: "Central Motor Vehicle Rules strictly contemplates accompanying of an instructor in a motor vehicle, but excludes the motorcycle. Therefore, I hold that a learner's licence is also a valid licence, the rider or the learner need not accompany any instructor for motorcycle, as required in case of four wheeler motor vehicles, which require an instructor. Therefore, the contention taken up by the insurer that the respondent No.1 (Anjana) was not holding a valid driving licence and she was holding only learner's licence to ride a motorcycle on the road, cannot be accepted."

It added, "The contention taken by the learned counsel for appellant/insurer that the Tribunal has awarded the exorbitant and excessive compensation cannot be acceptable and it does not call for any interference of this Court."

Accordingly, the court dismissed the petition filed by the Insurance Company and upheld the order passed by the Tribunal. The court granted an amount of Rs 12,65,731, as compensation under various heads along with 9 percent interest.