Life Convict in Jail for 21 Years Without Remission: Supreme Court Asks Him to Approach High Court for Bail 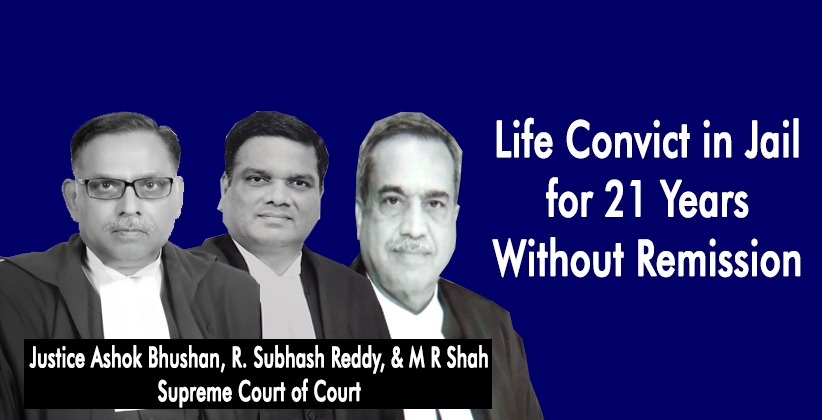 On November 18, 2020, the Supreme Court disposed of a writ petition filed by a life convict (whose appeal against the order of conviction is pending before the Allahabad High Court for more than 16 years), with directions to the High Court to consider his application for bail forthwith.

After being informed by the petitioners that he spent over 21 years in prison during the pendency of his appeal, without any remission, the three-judge bench of Justice Ashok Bhushan, R. Subhash Reddy, and M R Shah granted liberty to the Petitioner to file a fresh bail application which shall be decided within a period of one month.

The order states that "It appears that the bail remained pending from 2004-2013 and was disposed of for want of prosecution. Therefore, several dates were fixed for the hearing of the appeal but could not be heard to date. The counsel for the petitioner submits that the petitioner being in Jail for 21 years, should be released on bail. We are of the view that in the facts of the present cases, ends of justice be served in giving the liberty to the petitioner to make a fresh application for suspension of sentence and grant of bail before High Court in the pending criminal appeal."

The petitioner had requested the Supreme Court to grant him pre-mature release as his case has remained unheard for a while and he had already spent a long time in jail, in good behavior. The petitioner’s plea emphasized the judgment of Shor v. State of Uttar Pradesh (2020 SCC Online SC 626) whereby the Supreme Court released the petitioner therein pre-maturely as he had already undergone 28years in jail had clean antecedents and his conduct in jail was good.

The petitioner submitted that let alone the appeal, an application for recall filed by him before the Allahabad High Court against the rejection of his bail /suspension of sentence has not been decided finally since February 2013.

The plea states that "The petitioner deserves sympathy as his family is shattered because the petitioner is languishing in jail for more than 21years and post his conviction in 2004, it has been 16 years but neither he has been granted bail during the pendency of appeal, not his appeal has been heard and finally decided by the Hon'ble High Court.”