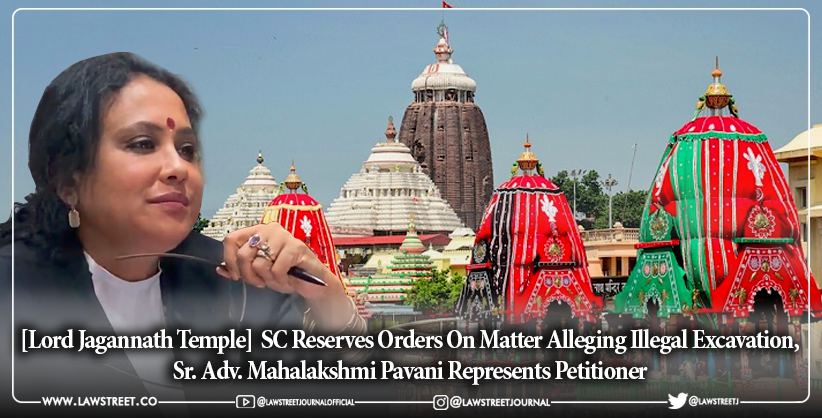 On Thursday, the Supreme Court reserved its order in two petitions alleging that the Odisha government carried out illegal excavation and construction work on the premises of the Shree Jagannath Temple in Puri.

Orders will be pronounced by the Apex Court tomorrow.

Two special leave petitions challenging the Odisha High Court's ruling refusing to restrain the state from excavating in and around Lord Jagannath Temple in Puri were being considered by a vacation bench consisting of Justice BR Gavai and Justice Hima Kohli.

Arguments of the petitioners -

Appearing in one of the petitions, Senior Advocate Mahalaxmi Pavani submitted that, as per the Ancient Monuments and Archeological Sites and Remains Act 1958, the State Government has to obtain an NOC from the competent authority for carrying out any work in a protected site. The State took an NOC from the National Monuments Authority for the construction work. However, the competent authority under the Act to grant the NOC is the Director or Commissioner of Archeology. The senior counsel referred to inspection reports to submit that "irreparable damage" has been caused to the heritage site.

Appearing for the second petitioner, Advocate Vinay Navare, supplemented the arguments. He submitted that,

"What's happening is excavation. These are centuries old monuments. Also, you can't give it to someone from outside. Report of the officer of the Archeology department records that construction carried out is within the prohibited area."

According to the petitioners, the State Government is attempting to create something by excavating more than 30 feet below ground level with large excavators, just near to Meghanad Pacheri, which is a vital feature of the temple. Cracks have also been discovered in the temple and its walls, according to reports.

The petitioners allege that the government of Odisha is carrying out unauthorised construction work that is endangering the structure of Mahaprabhu Shree Jagannath's historic temple.

The petitioners further claimed that the Shree Jagannath Temple in Puri was declared a monument under the AMASR Act, 1958, through a Gazette Notification dated February 3, 1975, and that under Section 19(1) of the AMASR Act, no one, including the owner-operator, is permitted to construct any structure within the protected area. It has been argued that Section 20A of the AMASR Act makes it clear that no construction can be built within 100 metres of the prohibited area.

Arguments of the State -

According to Ashok Kumar Parija, Advocate General of Odisha, the National Monuments Authority is the authority under the AMASR Act, and the Director of Culture of the State of Odisha has been notified as the competent authority. As per the AG, the State's activities do not fall under the definition of "construction" as defined under the Act.

Referring to Section 2(dc) of the Act, the AG said that,

"Any re-construction, repair and renovation of an existing structure or building, or, construction, maintenance and cleaning of drains and drainage works and of public latrines, urinals and similar conveniences, or, the construction and maintenance of works meant for providing supply of water for public do not come within the ambit of "construction."

As per the AG, the state is carrying out activities to provide amenities to pilgrims, and the NMA has given its permission.

The AG submitted that,

"60,000 people are visiting everyday, that's the footfall. It was said that there's a need to have toilets. The Amicus pointed out there was a necessity for more toilets and the court had issued directions in that regard..What is being carried out is to beautify the area and create facilities for the devotees. Some other work is in the security of the temple."

Senior Advocate Pinaki Mishra, arguing for a respondent, stated that approximately 15-20 lakh people attend the site during the annual Rath Yatra and that there have been stampedes in the past. As a result, there was a need to clean up the area as well as enhance pilgrim amenities. He submitted that,

"Entire sevayak associations support this state govt venture to decongest the area so that Puri becomes a world heritage city. They are backing this as they have given their lands and buildings and want the work to be completed."

The High Court of Odisha delivered the decision in response to a petition filed in March alleging that the digging of land near the temple wall endangers the temple's structural safety. The High Court had ruled on a joint inspection of the area by the Archeological Survey of India and state government authorities, as well as the submission of a report.

In their affidavit to the High Court, the ASI stated that the Odisha Bridge Construction Corporation, the PSU in charge of the project, may have destroyed archaeological relics from about the 12th century Lord  Jagannath temple during extensive excavation for the Sri Mandir Parikrama Plan.

What is the nature of the construction project that is the subject of the plea?

The Odisha Chief Minister laid the foundation stone for the Jagannath Temple corridor project in 2021, with the goal of transforming the 75-meter perimeter of the Jagannath Temple into a heritage corridor to attract devotees. It's called the 'Sri Mandir Parikrama project,' and it's got a wide tiered green landscape with a pedestrian-only pathway.

According to Hindustan Times, the project was set to be completed by May 2023, with cloak rooms, restrooms, drinking water fountains, a temple reception centre with a queue management facility for 6,000 people, information-cum-donation kiosks, shade pavilions, multi-level car parking, a dedicated shuttle-cum emergency lane for accommodating police, fire, and emergency vehicles, and an integrated command and control system.