State Can’t Hide Behind Public Policy to Risk the Life of People: Madras HC while Declining to Lift the Ban on Liquor Sale [READ ORDER] 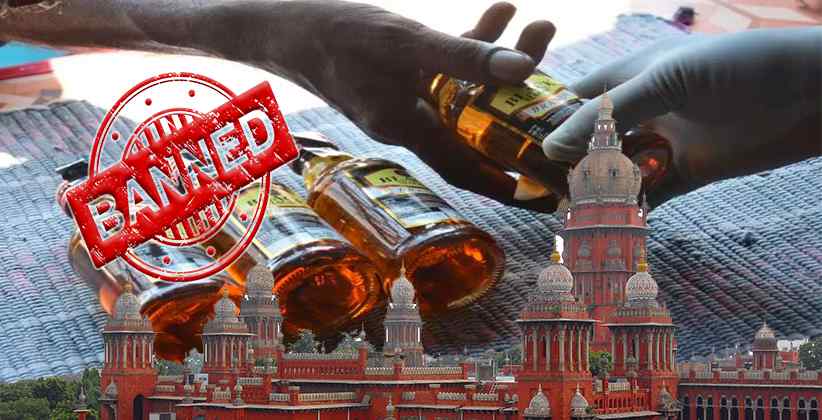 “In a Republican democracy as ours, when the executive wing was to pursue a policy that is likely to destroy the right to life, the judicial wing cannot afford to sleep like Kumbhakarna.”

On May 11, 2020, the Madurai Bench comprising Justices PN Prakash and BN Pugalendhi of the Madras High Court in the matter of Bonyface and Ors. v. State of Tamil Nadu and Ars. declined to interfere with the order passed by the bench of Justices Vineet Kothari and Pushpa Satynarayanan of the Principe Bench of the Madras High Court on May 08, 2020, whereby complete closure of the TASMAC/liquor vending outlets in Tamil Nadu was directed.

The bench concluded with the remarks that “we are in complete agreement with the order dated 08.05.2020 passed by the Division Bench at the Principal Seat and we also issue directions to close down the TASMAC shops in the same lines.”

Arguing the matter, petitioners mostly relied on the guidelines issued by the World Health Organisation (W.H.O.), while the main argument of the Additional Advocate General was that COVID-19 pandemic is not going to abate in the near future and therefore, people cannot be kept in domestic imprisonment indefinitely and that makes a compelling reason to resume economic activities.

He further tried to buttress his point by arguing that the Central Government itself has permitted the sale of liquor in a phased manner, and if the same is not done, the State exchequer will continue to incur revenue losses of not less than Rs. 100 crores per day. He also submitted that “the policy decision of the State cannot be subject to judicial review.”

In Paragraph 30 of the order, the bench noted that,

“The right of the State to carry on liquor sales via TASMAC shops is not an absolute one, but only, a qualified one under Article 19(1)(g) of the Constitution of India and when that right seeks to trample the right to life guaranteed by Article 21 of the Constitution of India, the former has to give way and remain subservient to the latter….. The State cannot be permitted to hide behind the cloak of policy decision when its action is likely to kill people in droves. At this critical juncture, if the judiciary fails to come to the rescue of the people and protect their cherished right to life guaranteed by Article 21 of the Constitution of India, history will not forgive this Court. Tipplers and their protagonists may say, “I have a right to pander to my habits of drinking which is personal, and no instrumentality of State can interfere.” Yes. We can afford to agree with this if the COVID-19 pandemic is not at our doorsteps threatening to devour lives. These tipplers are bound to transmit Coronavirus and cause extinction of not only their family members but also their sober neighbours. It appears that COVID-19 spreads like nuclear fission. A tippler may claim to have a right of self-destruction, but, in that process, he cannot destroy others. It is like a person committing self-immolation hugging his neighbour.”

The Court appreciated the fact that the petitioners were not seeking a complete prohibition of liquor vending by TASMAC shops, but the closure of liquor vending for a limited period to support the laudable efforts of the frontline COVID-19 warriors like doctors, nurses, paramedics,

The Court also noted that in the case of Khoday Distilleries Ltd. and others vs. State of Karnakata and Ors. [(1995) 1 SCC 574] the SC had concluded that the sale of liquor is res extra commercium, (outside commerce) and hence nobody can claim it as a right under Article 19(1)(g) which confers freedom on citizens to practice any profession.

The Bench observed that this ratio would apply not only to a citizen who wants to carry on trade or business in potable liquor as a matter of right but also to the State that wants to conduct the liquor business, by itself.

Background of the Controversy:

On May 06, 2020, the Madras High Court Bench of Justices Vineet Kothari and Pushpa Sathyanaranana had refused to stay the re-opening of TASMAC outlets for the sale of alcohol from May 7 onwards in the matter of B Ramkumar Adityan v. Chief Secretary, Tamil Nadu and Ors. Instead the Court had issued certain additional directions to be adhered to during the sale of alcohol in Tamil Nadu, adding to the precautionary guidelines already issued in Government notifications in this regard.

Two days later on May 08, 2020, exclaiming that all the precautionary directions given by the TASMAC authorities as well as the High Court "have been thrown into air", the same bench had directed the closure of TASMAC/liquor vending outlets in Tamil Nadu, although the Court added that online or door-to-door delivery may be permitted. The bench also took note of the reports of law and order problems, the rise in domestic violence, and the death of four people.

The Tamil Nadu Government has moved the Supreme Court challenging the Madras High order on May 08, 2020, itself, pleading that the net effect of the Madras High Court's order is a "complete and indefinite standstill of the sale of liquor in the State leading to grave losses to the State’s revenue and commercial activity in the State."

The SC has previously adjourned the matter is likely to take it up for hearing today (May 12, 2020).