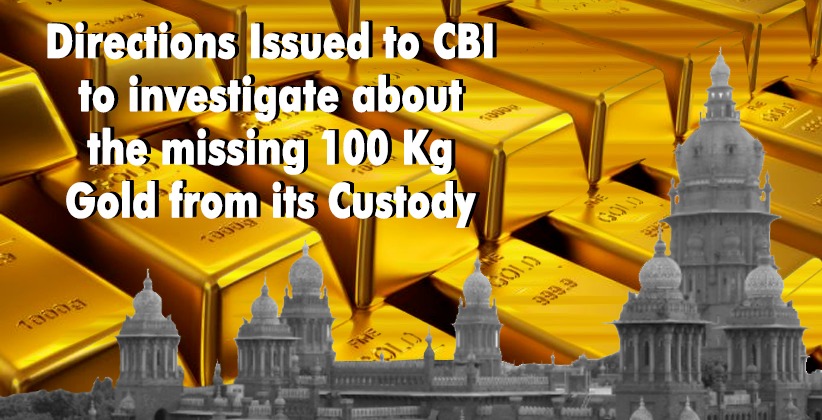 Court Observations: The bench noted thatin short, the contention of the CBI is that they seized only actually 296.606 kgs. of gold, but, had mistakenly shown in the inventory as 400.47 kgs. of gold. The bench asked Mr.K.Srinivasan, learned Special Public Prosecutor, “Had any property been lost either from the malkhana (property room) of the Court or from the malkhana of the CBI, what should have been done?”  Wherein the bench remarked which reads as under: A regular FIR for theft should have been registered in the jurisdictional police station and the police investigation under Chapter XII of Cr.P.C. should have been conducted. At the end of the investigation, the Investigating Officer may come to the conclusion that the actual gold that was seized was only 296.606 kgs., but, it was mistakenly entered in the inventory as 400.47 kgs. Strangely, this has not been done in this case till date. One can understand if the difference had been a few grams, but, this Court is unable to fathom as to how there could be a discrepancy of more than 100 kgs. in the weight of gold. Gold will not diminish in weight like ganja by efflux of time. Unfortunately, it appears that all parties to the great bullion expedition have deflected the golden question as to where this alleged gold weighing 103.864 kg actually was.  Withoutintending to hypothesize or speculate, the bench brings out three distinct possibilities on the fate of the gold which require investigation:  However, the bench also pointed out that this Court is not expressing any opinion on these possibilities. Suffice it to say that a free and fair investigation is, therefore, imperative to unearth the truth in this case. The bench remarked in the lighter tone while quoting a sapient passage from the celebrated judgment of the Supreme Court in Aher Raja Khima vs. State of Saurashtra that “it may be an Agni Pariksha for the CBI, but, that cannot be helped. If their hands are clean, like Sita, they may come out brighter, if not, they would have to face the music. Averments with regard to weight in a panchanama cannot be taken lightly, especially in a case of this nature when the difference is not a few grams, but, a whopping one lakh grams. Be it noted, in NDPS Act cases, weight of the contraband determines the quantum of punishment.” Direction Issued by the Madras High Court: As bench observed that the prayer in this writ petition is for a writ of mandamus to return the remaining gold, which cannot be granted without finding out what has actually happened to the alleged shortfall of 103.864 kgs. of gold the bench issued following direction:    [READ ORDER]