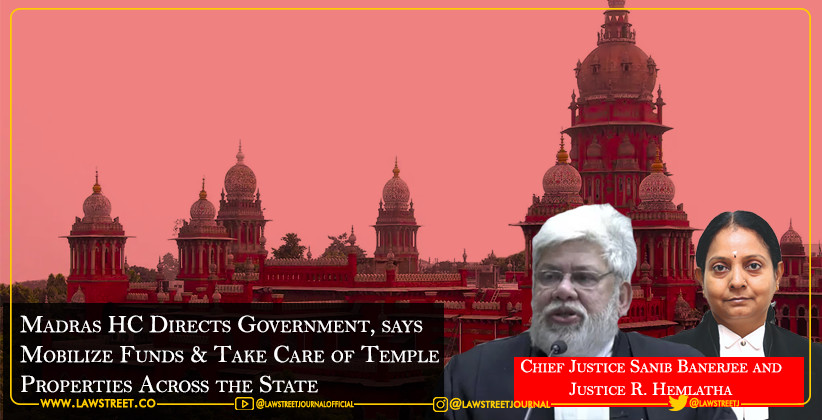 Recently, the State Government was directed by the Madras High Court to make all the possible efforts for protecting the temple bodies across the state along with mobilizing funds for the maintenance of temples and restoration if required.

The matter was being heard by Chief Justice Sanib Banerjee along with Justice R. Hemlatha. The Bench observed:

Temple lands often fall into disuse and are encroached upon and water bodies within temple lands become virtual public properties without any protection. It is imperative that appropriate measures are taken in such regard all over the State"

Facts of the Matter

A plea requesting for directions to the State Government had been filed before the court. One of the directions being the constitution of committees to inspect the records which are maintained by the Hindu Religious and Charitable Endowments’ Department Officials all over the state along with those maintained by Arulmigu Subramaniaswamy Thirukoil Temple along with other temples in the state.

It further pursued directions which could secure and safeguard the interests of the temples across the State along with directing the Commissioner, Hindu Religious anf Charitable Endowment Department for initiating departmental action against the delinquent officials which could be held responsible for the missing records of the temple and its properties.

After the submissions of the Petitioner, the Court noted the fact as proposed by the Respondents that substantive directions had been issued by the Principal Secretary of the Department. It further noted:

"For the moment, no immediate action is called for, if only to allow the steps suggested by the Principal Secretary to be implemented. It must be emphasized, however, that every effort should be made by the relevant department to protect temple properties all over the State, to mobilize the funds for the purpose of the maintenance, upkeep and even restoration of temples."

The court called for immediate action to be taken after the directions of the Principal Secretary along with endowing the Petitioners the liberty to approach the Court again after reasonable time if no improvements have been made at the ground level. It further said that the matter must be moved before the Principal Seat in case the Petitioner seeks directions for temples all across the state.

This was noted by court that PILs pertaining to the districts which were covered by the Madurai Bench of the Madras HC  could be instituted before it, however, when it was about Pan-State matters being the subject matter of any litigation, including PIL, they should be carried to the principal sear of the court.

On this note, the petition was disposed of.