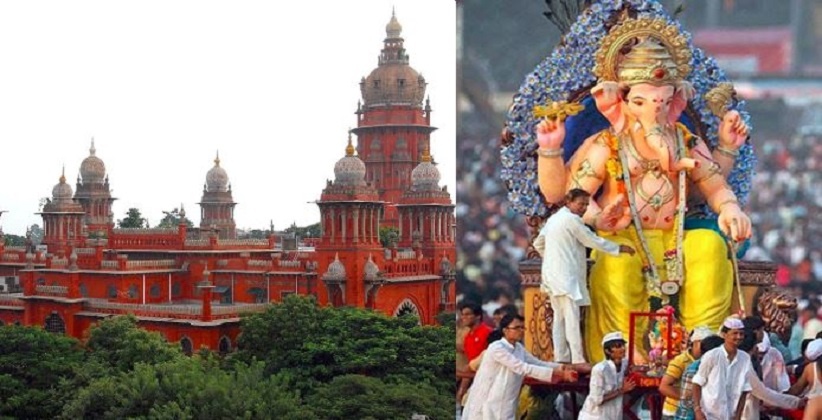 The Madras High Court by an order dated September 5, 2018, has dismissed a Public Interest Litigation (PIL) challenging some regulations on installation and worship of Vinayagar idols and its immersion in relation to the Ganesh Chathurti festival in the State.

The instant writ petition was filed by Mr. S. Sudalaiyandi, a practicing advocate seeking to quash the Condition Nos. 1 (i), (iii) and 15 of the guidelines dated August 9, 2018, as unconstitutional and violative of Articles 14, 25 & 26 of the Constitution of India.

The listed conditions of the guideline states that:-

The petitioner contended that getting permission from the land owner concerned would be difficult, as no land owner would grant permission, to put up a stage for Vinayagar idols, in front of his house and that police may register false cases. It would be practically impossible for any organiser, intending to install vinayagar idol to obtain NOC from the local bodies concerned/Highways or the Department because due to political pressure, local bodies would not grant permission.

The Bench of Justice S. Manikumar and Justice Subramonium Prasad, in concern of Guideline No. 1 (i) observed that the “writ petitioner has no constitutional or statutory right, to infringe the rights of a land owner, without his written consent, to install any idol, much less vinayagar statue in front of his house. If there is infringement of a right to property, owner of the property, can always bring it to the notice of the law enforcing authority, or any other competent authority, as the case may be to protect his right to property. Apprehension of the petitioner that cases would be registered against a person, installing vinayakar idol, in front of his house, cannot be countenanced. Certainly, if the land is a public land, it requires permission from the local bodies concerned/Highways or the department. Petitioner has no statutory or constitutional right, to install any idol, much less, vinayakar idol, without, No Objection Certificate from the local body/Highways or Department. For the abovesaid reasons, challenge to Guideline No.1 (i) has to fail and accordingly, we hold that the same, as not, unconstitutional of Articles 25 and 26 of the Constitution of India.”

The Bench also rejected the challenge against Guideline No. 15 regarding immersion of the Vinayakar idols within five days from the date of installation and said that “time period that idol must be installed in a particular day, and should be immersed within a specified period cannot be ascertained, in a writ. If the petitioner contends that a minimum of ten days is required, then, substantiating facts, circumstances and evidence, it could be done only in a suit. Nothing has been produced that the time period, is an indicative part of religion, for which, a protection order has to be granted.”

“State is under the obligation to maintain public peace, tranquility, regulation of traffic and control of pollution, which factors have been taken note of, while framing the guidelines, got installation of vinayakar idols, worship and immersion thereof. Condition No.15 of the guidelines cannot be said to be violative of Articles 25 & 26 of the Constitution of India. What is stated as regards period and practice in the State of Maharashtra cannot be imported to State of Tamil Nadu. For illustration, Durga Pooja is celebrated for 8 days in West Bengal, and not in Tamil Nadu. There is no violation of Article 14 of the Constitution of India,” the Bench added.

Govt. Bans Saridon And 327 Other Drugs Due To Health Risk.