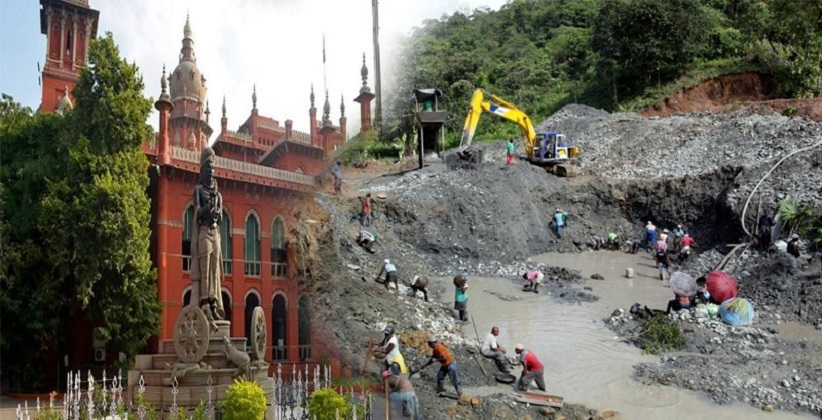 In a criminal petition filed “under section 438 of Cr.P.C” seeking anticipatory bail for the offences related to illegal quarrying/mining, theft, and smuggling of sand and minerals, Madras HC took a serious view and passed a common order in 36 such petitions.

All the pleas were dismissed and while dismissing the plea single judge bench of Justice AD Jagdish Chandira said that “This court can see that due to the amount of money involved, the business of illegal quarrying/mining, theft, and sand smuggling activities is increasing day by day and offenders are bold enough to involve in the offences with a fond belief that they will be able to get advance bail by accepting and undertaking to comply with any stringent conditions imposed by the courts. Orders of the courts are routinely taken more lightly, and the industry is thriving by engaging men and materials on a large scale. Heavy and high- cost equipment and vehicles like excavators, earthmovers, JCB, Poclain, and Hitachi are used to excavate and heavy Lorries viz., Taurus and Tata Benz are being used in the illegal mining business flouting all rules which remain in paper only.”

The court asked itself question that “In a society that has a well- established system of justice and law, should the courts restrict its role only to adjudication of issues and abdicate and shirk its responsibility and pass on the duty of controlling and preventing crime to the police and State authorities alone?”

The court observed that despite imposing serious conditions directing payment of hefty amounts and imposing stringent conditions the offences of such nature have not come down and on the contrary, there seems to be a rising trend, in these cases, increasing day by day.

“It is an open secret that various mafias are controlling the illegal business at various locations. By this cartelization, not only the State's exchequer, the entire society is affected. In a way, the illegal business is nothing but an organized crime against the society and each individual offender plays an active role in organized crime. The greed and selfish attitude of the offenders are increasing day by day. The Courts cannot keep the eyes and ears closed.”

The Court finds that “the sand and mineral offenders are unmindful of the fact that they are killing their mother nature and are continuing to indulge in illegal activities since there is hope for them, that they can get away by complying with the stringent conditions imposed by the courts while granting anticipatory bail/advance bail. It is also surprising and astonishing to note that despite the seizure of vehicles and coming to know the names of owners and persons involved in the illegal activities they are allowed to roam Scott free and given sufficient time to approach this court to obtain orders of advance bail.”

The court also expresses its grief towards that the routine exercise of discretionary power has allowed the miscreants to indulge in illegal activities fully understanding the consequences and implications.

It also asks itself another question “whether the discretionary power “under Section 438 of Cr.P.C” can be routinely exercised for cases of illegal quarrying/mining, theft, and smuggling of sand and minerals?”

The court after referring to judgments gave its opinion and said that “the offenders despite several orders passed by various benches of this court regarding illegal sand mining and knowing fully well about the evil consequences affecting the environment and society at large and the implications thereon are indulging in the offenses of illegal quarrying/mining, theft, and smuggling of sand and minerals. Ignorance and feigned ignorance of the law cannot be excused.”

The court further added that “the discretionary power has been consciously and continuously misused by the offenders and the enforcers as well in an organized manner and this Court is of the firm opinion that the discretionary powers cannot be extended to persons indulging in illegal sand mining, smuggling, and theft of sand and minerals.”

The court at end of its judgment said that it fears that this order could bring in a counter effect of nonregistration of cases regarding illegal quarrying/mining, theft, and smuggling of sand and minerals.

The court directed the Director-General of Police to periodically review the progress of illegal mining/quarrying cases and allied offenses in a time-bound manner to ensure that "the final reports are filed within the prescribed time and accused are taken to trial."