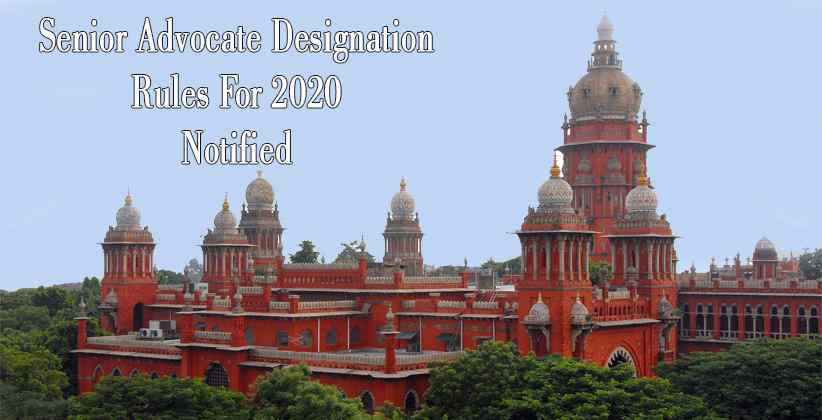 The Madras High Court recently notified the rules for the designation process of Senior Advocates. This is following the Supreme Court's 2017 judgment in Indira Jaising v. Supreme Court and anr.

Following the judgment in the Supreme Court's ruling, the issue concerns designation of Senior Advocates at the High Court. This will be handled by a Permanent Committee which is chaired by the Chief Justice and consists of two senior-most judges, the Advocate General, and a Senior Advocate chosen by the Committee members. The process of analysis for the same has been prescribed by these Rules.

The applications for the Senior Advocate role in the state of Tamil Nadu will primarily be scrutinized by a Secretariat, following which it is referred to as the Permanent Committee.

Following that, the judgment on whether to give the Senior Gown will lie on the Full Court. Decisions will be made through the process of majority voting. In the case of a tie, Chief Justice would get a second vote.

Certain aspects however stand out, which include the factor of minimum age. This is for those lawyers who do not have any judicial experience.

The apex court in this matter observed that the years of practice should be given more importance than the minimum age criterion during scrutiny of applicants for the Senior designations.

"Insofar as age is concerned, we are inclined to take the view that instead of having a minimum age with a provision of relaxation in an appropriate case it would be better to go by the norm of 10 years’ practice at the Bar which is also what is prescribed by Article 217 of the Constitution as a condition of eligibility for being considered for appointment as a Judge of the High Court.”

The qualification criteria described in Rule 4 of the Madras High Court's Rules:

The following privileges are applicable to the designation:

These privileges are subject to some restrictions. The restriction to be noted that is given by the Madras High Court is that a Senior Advocate cannot seek adjournments or appear to make mentions.