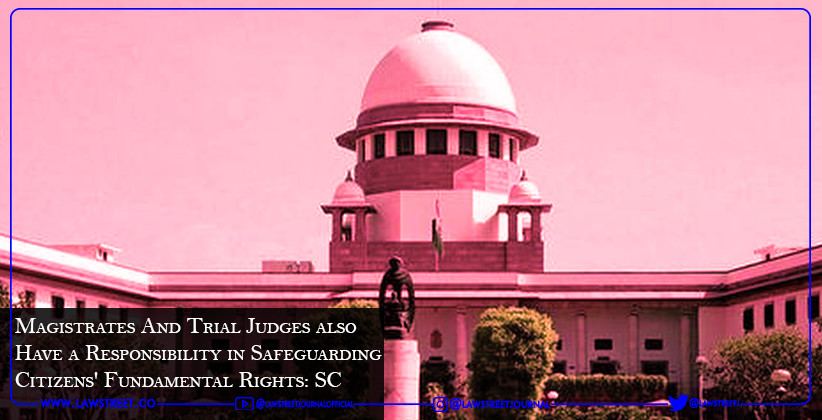 While giving a judgment on a case titled ‘Krishna Lal Chawla Vs. State Of U.P.’ where the role of the lower Judiciary in preventing abuse of criminal court process is emphasized, Supreme Court remarked:

“The trial Judges have as much, if not more, responsibility in safeguarding the fundamental rights of the citizens of India as the highest court of this land.”

This is a case that should not have been allowed to reach as far as this Court, the bench said while quashing an order of Magistrate who issued process in a complaint lodged after six years of filing a Non- Cognizable Report with respect to same incident against the same accused.

The court said that, on receipt of a private complaint, the Magistrate must:

“It  would  be  only  proper  for  this  Court  to deny  any  relief  to  a  litigant  who  attempts  to  pollute  the  stream  of justice  by  coming  to  it  with  his  unclean  hands.  Similarly,  a litigant   pursuing   frivolous  and vexatious  proceedings  cannot claim  unlimited  right  upon  court  time  and  publicmoney  to achieve his ends,” the court said.

The court also noted that justice dispensation machinery in India is plagued with backlogs, with 70% of the pendency before the subordinate courts being on the criminal side.

“A  significant  factor  in  this  backlog  is  the  vast mass  of  frivolous  litigation  instituted  year  after  year  by  litigants with   an  intent  to  use  the  courts  of  justice  for  their  own mischievous  ends.  Curtailing  such  vexatious  litigation  is,  thus,  a crucial  step  towards  a  more effective  justice  system  –  a  step  that cannot  be  taken  without  the  active  involvement  of  the  lower judiciary, especially  in  criminal  proceedings.”

The court noted that immediately  after  the  criminal  justice  system  is  set  in motion,  its  course  is  almost  entirely  dependent  on  the  judicial application  of  mind  by  the  Magistrate. It added that the power to issue a summoning order is a matter of grave importance, and that the Magistrate must only allow criminal law to take its course after satisfying himself that there is a real case to be made.

When a police complaint is filed on the commission cognizable  offence under Section  154 CrPC,  the  Magistrate  decides  if  the  charge  against  the  accused person  is  made  out  before  the  trial  begins.  Separate  procedure  is prescribed  if  the  complaint  under  Section  200  CrPC  is  filed.  The aforesaid  provisions  make  it  abundantly  clear  that  the  Magistrate carries  the  stream  of  criminal  proceeding  forward  after  it  is  set  in motion   by   the   informant/complainant.   Consequently, and automatically,  the  Magistrate  also  carries  the  responsibility  for ensuring  this  stream  does  not  carry  forward  in  cases  where  it should not.

In the instant case, the court noted that the Magistrate was aware of the significant delay in the filing of private complaint and of the material improvements from the earlier NCR No. 158/2012 which were made in the private complaint.

“It was incumbent on the Magistrate to examine any possibility of abuse of process of the court, make further enquiries, and dismiss the frivolous complaint at the outset after judicial application of mind,” it was noted.

The judgment was given by Justices Mohan M. Shantanagoudar and R. Subhash Reddy

No Right Accrues in Favour of Bidders of a Tender Offer Unless Approved by the Higher Authorities: Orissa HC [READ JUDGMENT]