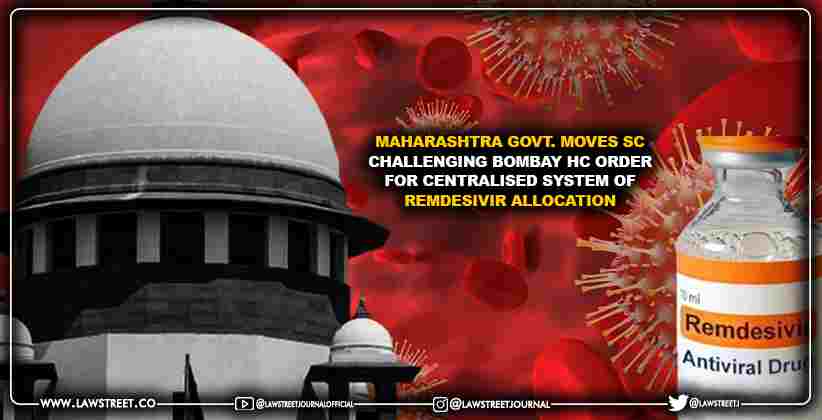 The Supreme Court on May 31st 2021, Monday tagged along the suo moto case on covid issues, the petition filed by Maharashtra government challenging Bombay High Court Nagpur Bench’s order dated May 2nd 2021, Sunday, directing the State Government for taking steps to centralise the system for the procurement, allocation and distribution of anti-viral drug Remdesivir, used for treating Covid-19 patients.

The bench, presided by Justice DY Chandrachud, Justice L. Nageswara Rao and Justice S. Ravindra Bhat tagged the plea along with the suo moto covid case in Re Distribution of Essential Supplies and Services During Pandemic.

About the impugned order:

Hearing its suo moto PIL uncovered 19 management in Nagpur and wither pas regions of Maharashtra, the division bench chaired by justice Sunil Shukre and Avinash Gharote of the Bombay High Court directed the seven manufacturers of the drug to ensure they supply vials to the state government before catering to individual pharmacists demand’s and submitting their daily production figures to the nodal officer and state commissioner of the Food and Drug administration.

Taking judicial note of the shortfall in vials distributed to different districts of Maharashtra every day the bench directed that:

The court also said that, “We direct the state of Maharashtra to hold the pharma companies responsible and take coercive action against pharmaceutical companies in case of noncompliance with the central governments allocation.”

The bench told the FDA to upload the weekly distribution of Remdesivir vials within the state and provide a daily update of the Remdesivir distributed and the backlog, to ensure the steady supply of vials to Nagpur and other parts of Vidhabha.

The bench also expressed concerns at the mandatory requirement of registration in the Co-Win app for getting a slot of COVID vaccination, as a large section of the Indian population is deprived of access to smart phones and Internet.