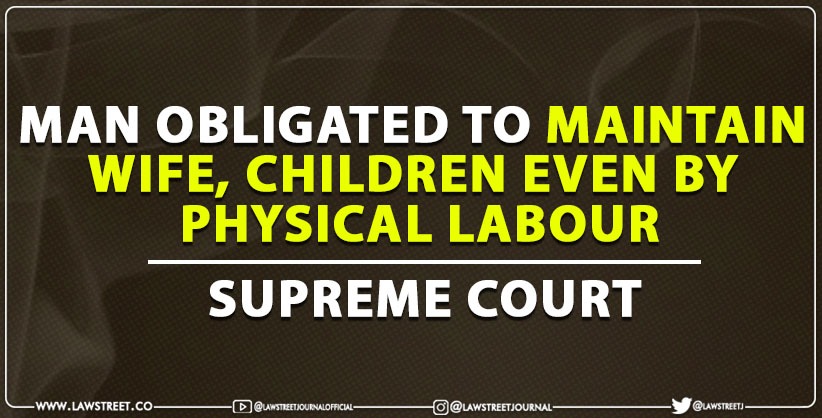 NEW DELHI: The Supreme Court on Wednesday said it is sacrosanct duty of a man to provide financial support to the wife and the minor children and he is required to earn money, even by physical labour, to pay maintenance to them.

A bench of Justices Dinesh Maheshwari and Bela M Trivedi said Section 125 of the Criminal Procedure Code is a measure of social justice and is specially enacted to protect women and children.

The court allowed an appeal by a woman against the Punjab and Haryana High Court's order which had upheld the decision by a family court in Faridabad, rejecting her plea for maintenance to her and son.

The court rejected the man's plea that he had a small business, which was closed down, so he had no source of income. It directed the man to pay Rs 10,000 to the wife over and above Rs 6,000 to the son.

"The husband is required to earn money even by physical labour, if he is an able-bodied, and could not avoid his obligation, except on the legally permissible grounds mentioned in the statute," the bench said.

The man questioned the chastity of wife, claiming the boy, supposed to be born out of wedlock, was not his biological son.

The family court though rejected his plea for DNA test but disallowed the woman's plea for maintenance and the daughter, though it directed for paying Rs 6,000 monthly to the son.

"The Family Court had not only over-looked and disregarded the settled legal position. It misdirected itself. Such an erroneous and perverse order was unfortunately confirmed by the High Court by passing a very perfunctory order," the bench said.

The couple here got married on December 07, 1991 as per the Hindu rites. Out of the said wedlock, two children a daughter and a son were born on October 10, 1992 and April 11, 1999 respectively. The wife and chikdren filed the Maintenance Petition under Section 125 of the CrPC, alleging inter-alia that the man was subjecting the appellant-wife to utmost cruelty and physical and mental torture. As a result, she had to leave her matrimonial home along with the children.

"Such an erroneous and perverse order of Family Court was unfortunately confirmed by the High Court by passing a very perfunctory impugned order. The High Court, without assigning any reasons, passed the impugned order in a very casual manner," the top court said.