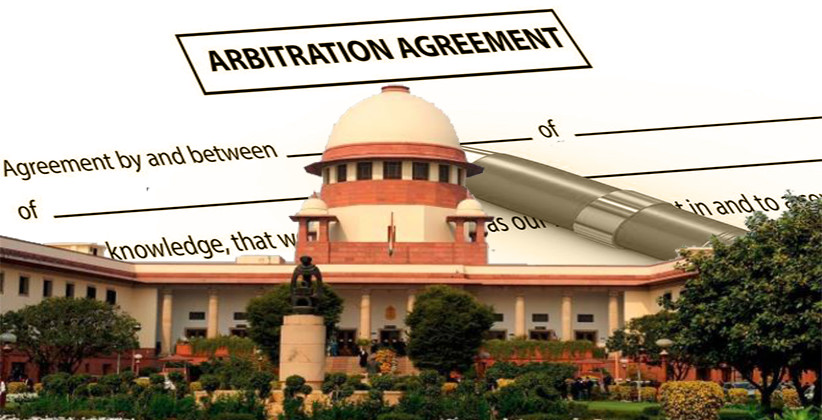 The Supreme Court on September 4, 2019, in the case of Rashid Raza v. Sadaf Akhtar has reiterated that mere allegation of fraud simplicitor may not be a ground to nullify the effect of arbitration agreement between the parties.

A Bench comprising of Justice Rohinton Fali Nariman, Justice R. Subhash Reddy and Justice Surya Kant was hearing an appeal filed against the judgment passed by the High Court which had refused a plea seeking appointment of Arbitrator by one partner taking note that an FIR lodged by some other partners alleging siphoning of funds and various other business improprieties that were committed, is presently under investigation.

The High Court cited judgment in A. Ayyasamy v. A. Paramasivam and Others to rule that dispute involving serious allegations of fraud of complicated nature are not fit to be decided in arbitration proceedings.

In appeal, the apex court Bench noticed that two tests have been laid down in A. Ayyasamy judgment. They are: (1) does this plea permeate the entire contract and above all, the agreement of arbitration, rendering it void, or (2) whether the allegations of fraud touch upon the internal affairs of the parties inter se having no implication in the public domain.

In reference to the two tests, the Bench said: “Judged by these two tests, it is clear that this is a case which falls on the side of "simple allegations" as there is no allegation of fraud which would vitiate the partnership deed as a whole or, in particular, the arbitration clause concerned in the said deed. Secondly, all the allegations made which have been relied upon by the learned counsel appearing on behalf of the respondent, pertain to the affairs of the partnership and siphoning of funds therefrom and not to any matter in the public domain.”

Holding that the disputes raised between the parties in this case are arbitrable, the Bench observed that a Section 11 application under the Arbitration and Conciliation Act, 1996, would be maintainable.

The Bench observed that Paragraph 25 of A. Ayyasamy judgment lays down the law in this matter:

“In view of our aforesaid discussions, we are of the opinion that mere allegation of fraud simplicitor may not be a ground to nullify the effect of arbitration agreement between the parties. It is only in those cases where the Court, while dealing with Section 8 of the Act, finds that there are very serious allegations of fraud which make a virtual case of criminal offence or where allegations of fraud are so complicated that it becomes absolutely essential that such complex issues can be decided only by civil court on the appreciation of the voluminous evidence that needs to be produced, the Court can sidetrack the agreement by dismissing application under Section 8 and proceed with the suit on merits. It can be so done also in those cases where there are serious allegations of forgery/fabrication of documents in support of the plea of fraud or where fraud is alleged against the arbitration provision itself or is of such a nature that permeates the entire contract, including the agreement to arbitrate, meaning thereby in those cases where fraud goes to the validity of the contract itself of the entire contract which contains the arbitration clause or the validity of the arbitration clause itself. Reverse position thereof would be that where there are simple allegations of fraud touching upon the internal affairs of the party inter se and it has no implication in the public domain, the arbitration clause need not be avoided and the parties can be relegated to arbitration. While dealing with such an issue in an application under Section 8 of the Act, the focus of the Court has to be on the question as to whether jurisdiction of the Court has been ousted instead of focusing on the issue as to whether the Court has jurisdiction or not. It has to be kept in mind that insofar as the statutory scheme of the Act is concerned, it does not specifically exclude any category of cases as non-arbitrable. Such categories of non-arbitrable subjects are carved out by the Courts, keeping in mind the principle of common law that certain disputes which are of public nature, etc. are not capable of adjudication and settlement by arbitration and for resolution of such disputes, Courts, i.e. public fora, are better suited than a private forum of arbitration. Therefore, the inquiry of the Court, while dealing with an application under Section 8 of the Act, should be on the aforesaid aspect, viz. whether the nature of dispute is such that it cannot be referred to arbitration, even if there is an arbitration agreement between the parties. When the case of fraud is set up by one of the parties and on that basis that party wants to wriggle out of that arbitration agreement, a strict and meticulous inquiry into the allegations of fraud is needed and only when the Court is satisfied that the allegations are of serious and complicated nature that it would be more appropriate for the Court to deal with the subject matter rather than relegating the parties to arbitration, then alone such an application under Section 8 should be rejected.”

supreme court in indiaLaw of Arbitration