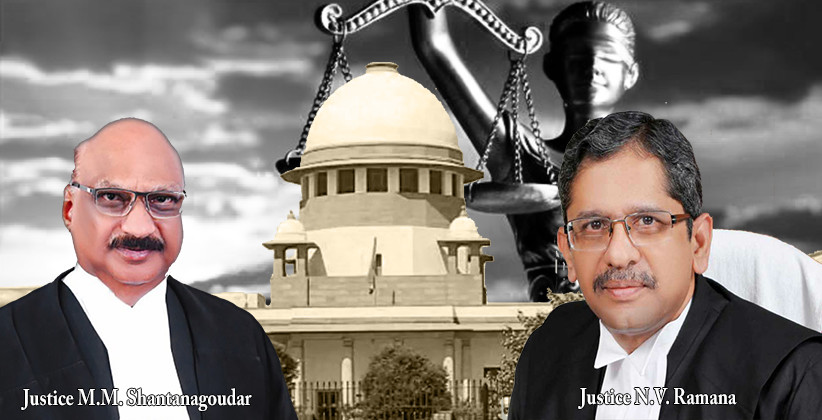 The Supreme Court on January 3, 2019, in the case of Satishchandra Ratanlal Shah v. State of Gujarat and Another, has held that mere failure to repay a loan would not automatically become a criminal offence unless there is criminal intent underlying the same.

A Division Bench comprising of Justices N.V. Ramana and M.M. Shantanagoudar passed an order clarifying this position while quashing charges of cheating and criminal breach of trust framed by an Additional Chief Metropolitan Magistrate in Gujarat.

In January 2008, one Satishchandra Ratanlal Shah took a loan of Rs27 lakh from Dharshan Fiscal Pvt Ltd, which was to be repaid within a year with interest. However, Mr. Shah did not repay the loan. When Dharshan Fiscal approached Mr. Shah for recovery of loan, it alleged that the borrower threatened with dire consequences. Dharshan Fiscal then filed an FIR against Mr. Shah under Section 406, 409, 417, 420, 294 (b) and 506 (2) of the Indian Penal Code, 1860.

When the police filed a charge sheet against Mr. Shah under Sections 406, 420 and 417 of the Indian Penal Code, 1860, on March 1, 2012, the metropolitan magistrate issued a summons against Mr. Shah. Later in his petition to the apex court, Mr. Shah alleged that he was given a copy of the charge sheet and on December 4, 2013, the magistrate framed charges on a blank sheet without giving him an opportunity of being heard.

Mr. Shah then filed a petition before the High Court requesting squashing of the FIR against him, however, the High Court dismissed his petition and directed the Trial Court to complete the trial within three months.

The High Court observed that prima facie an offence of cheating under Section 420 was made out but charge under Section 406 pertaining to criminal breach of trust was not applicable in the given factual scenario. However, the court did not remove the charges against Mr. Shah under Section 406 while noting that no case had been made out to get the charge quashed. Aggrieved with the decision, Mr. Shah approached the Supreme Court.

In its order, the Supreme Court Bench, said, "...it is to be noted that the criminal application preferred by the accused before the High Court was against the order of the trial court at the stage of framing of charges, wherein it is the duty of the court to apply its judicial mind to the material placed before it and to come to a clear conclusion that a prima facie case has been made out against the accused. An order of framing of charges is of serious concern to the accused as it affects his liberty substantially. The courts must therefore be cautions that their decision at this stage causes no irreparable harm to the accused."

"...we may note that there is nothing either in the complaint or in any material before us pointing to the fact that any property was entrusted to the appellant at all which he dishonestly converted for his own use so as to satisfy the ingredients of section 405 punishable under Section 406 of the Indian Penal Code (IPC). Hence, the learned magistrate committed a serious error in issuing process against the appellants for the said offence. Unfortunately, the high court also failed to correct this manifest error," the Bench said.

Pointing out that Dharshan Fiscal's pending summary civil suit for recovery of its loan amount, the Bench said, "The mere inability of the appellant to return the loan amount cannot give rise to a criminal prosecution for cheating unless fraudulent or dishonest intention is shown right at the beginning of the transaction as it is this mens rea which is the crux of the offence."

Therefore, setting aside the order passed by the High Court, the court allowed the appeal and quashed the proceedings initiated against Mr. Shah on the basis of the FIR registered.

Legal Course Adopted By Wife To Protect Her Rights Is Not Cruelty Against Husband: SC [Read Judgment]