Madras HC : Cost Of Rs. 20,000 On Litigant For Seeking Directions to build a Mobile App And Website For Liquor Sale [READ ORDER] 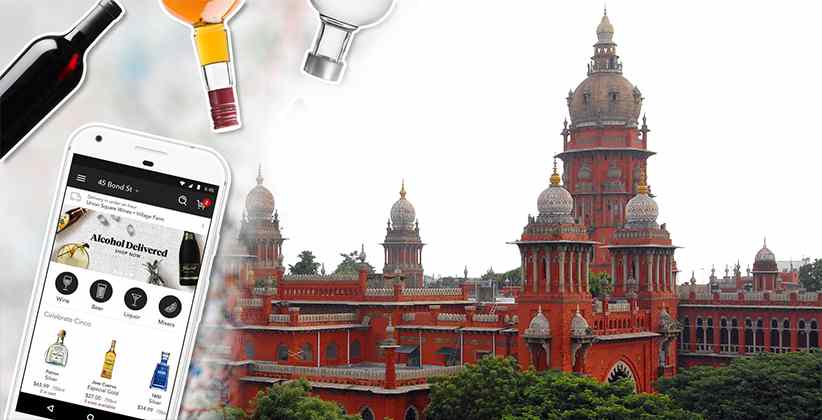 The Madras High Court came down heavily on petitioner/advocate for seeking directions for the development of a mobile app and a website for liquor sale before the opening of liquor shops for retail sales amid the COVID-19 lockdown and imposed a cost of Rs. 20,000 to be deposited in the Chief Minister Public Relief Fund, within a period of one week to dissuade him from filing such kind of petitions unnecessarily in future.

Order to this effect was passed by the Bench of Justices Dr. Vineet Kothari and Pushpa Sathyanarayana when they met to hear the petition through video conference on May 13, 2020.

The Court also remarked that “we expect the petitioner to observe a sense of professionalism while espousing the public cause in the public interest litigation petitions, in the future.”

One Mr. B. Ramkumar Adityan, a practicing advocate, had filed PIL petition, seeking a direction to the State Government of Tamil Nadu to develop a Mobile App and Website for selling liquors before the opening of all the Retail Liquor Selling Shops of the Tamil Nadu State Marketing Corporation Ltd throughout Tamil Nadu.

The Bench had apprised the litigants that the sale of liquor IN the State, is essentially a policy matter of the State and the same Bench had already entertained such writ petitions and passed interim orders on May 06 and May 08, 2020, in which one of the petitions was filed by the present petitioner himself.

The Bench also informed that the Hon'ble Supreme Court, has already listed on the matter on May 15, 2020, and a Full Bench has already been constituted by the Hon'ble Chief Justice of the Madras HC to take up the similar matters on May 14, 2020.

The learned Additional Advocate General, assisted by the learned Government Pleader, drew the attention of the Court to the fact that the petitioner was in the habit of filing such frivolous public interest litigation petitions and earlier in one such writ petition, a cost of Rs.10,000/- was imposed by the Court upon him, to dissuade him from filing such frivolous so-called public interest writ petitions for whatever extraneous reasons he may have, which he was required to mention in the present PIL and he had omitted to mention.

Sensing the mood of the Court, petitioner had sought the leave of the Court to withdraw this writ petition but the Court opined that “that such a series of alleged Public Interest Litigation writ petitions are filed unnecessarily by a professional and a practicing Advocate and filing of such frivolous petitions are nothing but wasting the time of the court rather than serving a real cause of public relating to TASMAC liquor sale.”

Principle Of "No Work-No Wages" Not Applicable In These Extraordinary Circumstances Of COVID-19: Bombay HC [Read Order]