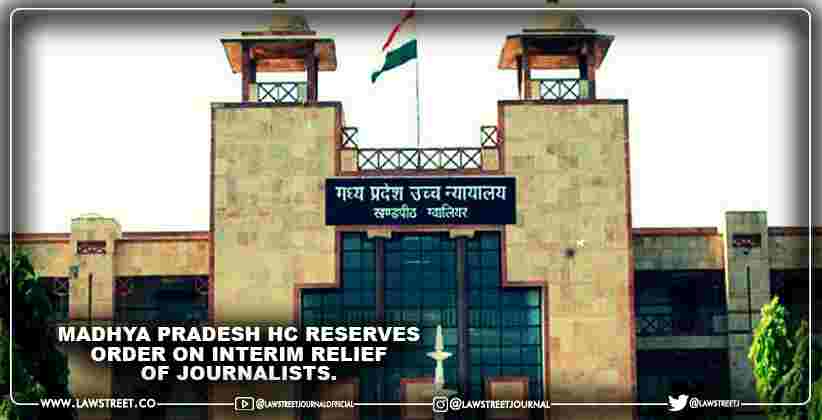 Madhya Pradesh High Court on Wednesday, June 09 2021, reserved an order on the interim bail of 4 legal journalists who had moved to the court to seek permission for live reporting.

A division bench of Justice Prakash Shrivastava and Justice Virender Singh observed that the right to live reporting court proceedings cannot be disputed. The court marked that the matter should be sent to the E-Committee as a representation of the Journalists so that it could take a concrete decision on this matter.

To this the bench observed that the right of the media persons to report the court proceedings live, cannot be disputed however it should be examined by the E-Committees of the High Court.

Responding to the statement Mr. Nidhesh Gupta argued that the committee will take its own time to come up with a solution and meanwhile, an interim relief could be granted to the journalists to have access to a certain link and through that link, they be given the access to the Court proceedings and once the E-Committee comes up with a concrete decision, the same would be applicable to all.

Mr. Gupta had also relied on the recent Judgement of the Hon’ble Supreme Court in the case of The Chief Election Commissioner vs. M.R Vijayabhaskar & Ors., 2021, in which the Top Court had asserted the right to live court proceedings.

Observing that Senior Counsel Nidhesh Gupta has assisted the Court on this crucial issue, the Court reserved an order on the point of interim Relief.