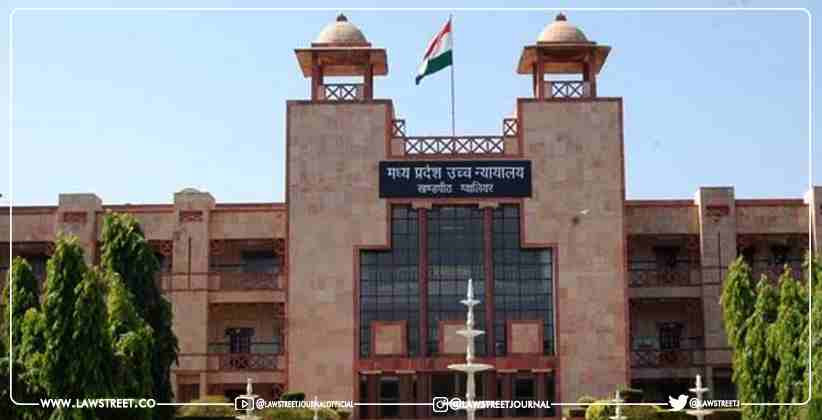 The Madhya Pradesh High Court directed the State government to reimburse the admissible  fees to a Law student who belonged to the reservation category OBC while relying on the principle of promissory estoppel.

The Court held that, "The principle of estoppel and acquiescence will apply and the State Government cannot stop payment of scholarship/fees to the disadvantage of the petitioner particularly in the light of Clause 5.3 and 6.2 of the Policy .

A Division Bench of Justices SA Dharmadhikari and Vishal Mishra upheld the claim of full reimbursement.

The case arises out of a claim of a student in Madhya Pradesh, who pursued a BA.LLB (Hons.) from National University of Study and Research in Law, Ranchi (Jharkhand) in 2014-19. The petitioner(Student) comes from a financially weak background belonging to the Other Backward Class category. The advocate who appearing for the petitioner side Prashant Singh kourav stated that,

"Petitioner paid a total non-refundable fee of Rs. 9,83,832/- in his five-year course, including tuition fees, hostel fee, registration fee, enrollment fee, etc. However, against the said fee payment, the petitioner received only Rs. 4,29,602/- from the State Government in benefit of the scheme".

The Petitioner made many representations to the State Authority for requesting the reimbursement of the outstanding fees, but no response.

Additional Advocate General MPS Raghuvanshi appeared for the State(respondent). He argued that the petitioner is not entitled to the sought relief as he pursued his studies outside the State of Madhya Pradesh, in Jharkhand. He further averred the State Government is yet to give their opinion on the said matter, and if the petitioner-student is found eligible, the benefit will be granted.

Seeking dismissal of the petition, he submitted that the petitioner is not entitled to any relief as claimed in the present petition.

The State of Madhya Pradesh had promulgated the Backward Class and Minority Welfare Scheme of 2013 for reimbursement of fees paid by students belonging to the OBC category, given that family income eligibility and other criteria are fulfilled. After examination of this state scheme, and argument by both sides court observed that the petitioner is entitled to get relief. State Government is obliged to reimburse the fees under tuition fees and all other heads. On the argument that the petitioner had pursued his education in a government university situated in another state, the Court noted that as per the scheme, the fees would be reimbursed irrespective of that.

According to the case Piru Dhakad v. The State of Madhya Pradesh (2015), where students of NLIU, Bhopal had sought similar relief. The Court had directed as follows:

Such of the students who have already paid the Tuition Fee and have passed out from the university after the conclusion of the course may submit a representation to the competent authority of the State Government, with proof of payment of the Tuition Fee and on the same being done, the entire Tuition Fee paid by them shall be refunded by the State Government within 60 days of submission of the representation, as per the direction issued in Clause (a) and (b) of this order, as may apply to a particular student."