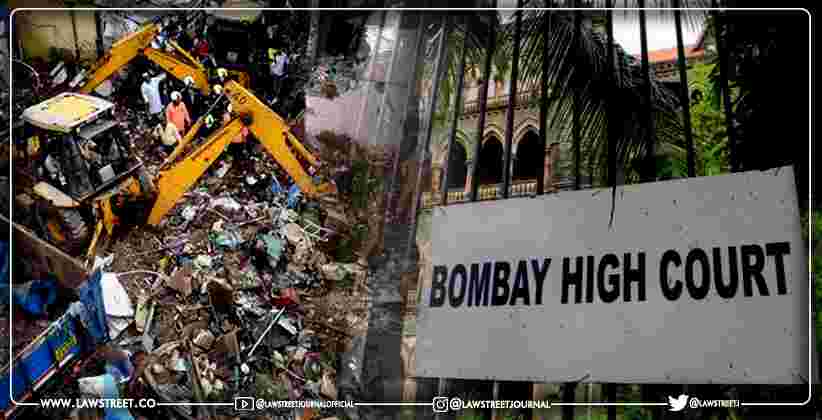 The Bombay High Court has initiated a judicial inquiry into the building collapse incident in the Malwani area of Mumbai, which claimed that 12 people lost their life including 8 children.

The court said that the incident proved that there existed absolute lawlessness in the municipal wards in Mumbai as well as its adjoining areas.

A bench of Chief Justice and Justice GS Kulkarni passed the order in a Suo Moto PIL to “put an end to the menace that unauthorized and dilapidated buildings pose to humankind” after 38 people died because of a building collapse incident in Bhiwandi on September 21, 2020.

The court directed the inquiry commissioner to submit the preliminary report of the incident by June 24.

The court further noted that between May 15 and June 10 this year, four incidents of building collapse were reported in Mumbai and its adjoining areas, in which a total of 24 people died.

“Were these buildings where demolition orders were passed and courts have stayed the demolitions or are these unauthorized structures and no action was taken. We read the owner (Malad building) performed the final rites of 8 people."

On this BMC’s (Brihanmumbai Municipal Corporation) counsel, Anil Sakhare said the Malad building was on Collector’s land and referred to a Government Resolution.

"1/3rd of South Mumbai is on Collectors Land," the bench remarked

“We will have to hold those in charge of the Malad building responsible for this; we need to initiate criminal action now. We are very sorry to say that with all these municipal corporations, Ulhasnagar, Kalyan Dombivli, we've failed in the planning aspect. We are playing with the lives of the citizens. Drastic, immediate consequences need to be attributed to all those in charge of executing the provisions of law."

The bench further stated that corporators should take responsibility and intimate authorities for illegal constructions in their areas.

Additional Solicitor General Anil Singh also notified the court that almost all of the Malwani is under the Collector and out of which 75% is unauthorized.

Further, the court was curious to know that the Ulhasnagar Municipal Corporation, had any legislation to check the instances of illegal construction or to demolish illegal structures. Ulhasnagar Corporation's counsel stated that it was a regularization process.

The court said that “This is nothing but lawlessness. You can realize the pain we are facing due to the death of people, including innocent children."

"This pain should also be felt by the corporators. We are shocked. This is a man-made disaster and nothing else. Every monsoon has to happen. Why it cannot be prevented?"

Earlier in the day, the bench was hearing another Suo Motu PIL concerning the expansion of the life of interim orders when it took exception to an interview by Mayor Kishori Pednekar in regards to Malad collapse.

The high court was referring to a news report published in a regional newspaper, in which Pednekar was quoted as referring to the stay order of the high court on eviction, and demolition of buildings during the pandemic, as one of the factors behind the Malwani incident.

The court stated that if a building is dangerous or dilapidated then the concerned authority should approach the court for demolition. Court also looked for an explanation from the Brihanmumbai Municipal Corporation (BMC) and said they would take up the Suo Motu PIL on building falls in the afternoon sessions.

"Unfortunately, building collapses are happening and Municipal Corporations and Councils are pointing fingers at us. These buildings have not come up yesterday. Now that authorities are in a soup, they are taking shelters under High Court's orders?"

The court then summoned lawyers of all the municipal corporations.

During the afternoon session, BMC's senior counsel explained that Pednekar was cited out of the context, and he was sorry for the same. He said that the whole transcript of the meeting would-be put-on record, however, there was no intention to attribute anything to the judiciary.

Chief Justice Datta said there was no need to apologize if the intent was not to blame the judiciary.