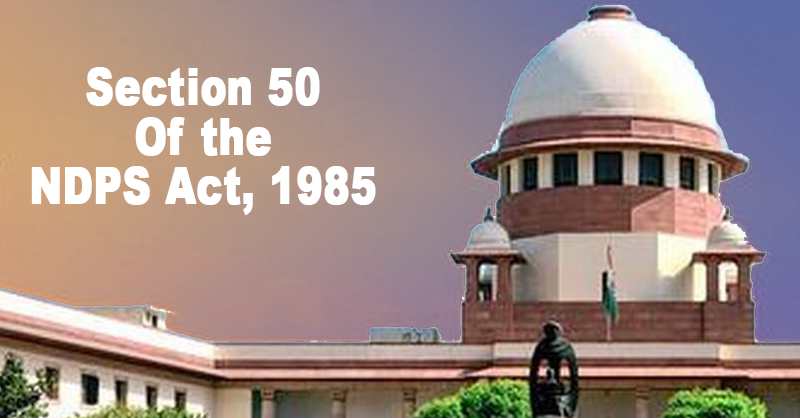 The Supreme Court while hearing a criminal appeal on Tuesday (September 15, 2020), reiterated the applicability of Section 50 of the Narcotics Drugs & Psychotropic Substances Act, 1985 [“NDPS Act” or “Act”] which is valid only in the case of personal search.

A bench comprising of Justice Ashok Bhushan, Justice R. Subhash Reddy, and Justice M.R. Shah heard an appeal challenging the Himachal Pradesh High Court conviction orders against the appellant claimed to be a priest in a temple. The contentions raised by the appellant in the appeal were regarding the non-compliance of Section 50 of the NDPS Act.

The accused (here, the appellant) was charged for the offense under Section 20 of the NDPS Act for being in possession of 13 Kg of charas. Initially, the Sessions Court had acquitted him mainly on the grounds, inter alia, that there was non-compliance of Section 50 of the NDPS Act by the prosecution. As per Section 50, a person to be searched under Sections 41, 42, or 43 of the NDPS Act has to be searched in presence of a Gazetted Officer or a Magistrate. However, the Trial Court noted that the fact that the samples were handed over to an officer who himself gave that sample to another officer for taking it to the Central Laboratory at Delhi, prime facie raises questions over the tampering of evidence. However, later on, the Himachal High Court set aside the Sessions Court orders and held the accused guilty under Section 20 of the Act.

The Apex Court in the present appeal while affirming the High Court orders upheld the conviction of the accused. Although it noted that Section 50 is applicable only in the case of personal search, the evidence on record shows that the appellant/accused was on the counter of the Dhaba constructed on the land owned by his wife which was nearby to the temple and the contraband (charas) was found in the counter of the Dhaba in a gunny bag. The bench from the above evidence concluded that the accused not only had direct physical control over contraband but was also very well aware of its presence and character.

The Court also referred to the State of H.P. v. Pawan Kumar judgmentwhere it was held that Section 50 of the Act can have no application when the contraband was allegedly recovered from the bag, which was being carried by the accused.

"There is no warrant or justification for giving an extended meaning to the word "person" occurring in the same provision so as to include even some bag, article, or container or some other baggage being carried by him.", the Pawan Kumar judgment said.

Considering the fact that the incident dates back to the year 2001 and that the accused is about 65 years now, the bench modified the sentence from 15 years of rigorous imprisonment to 10 years.