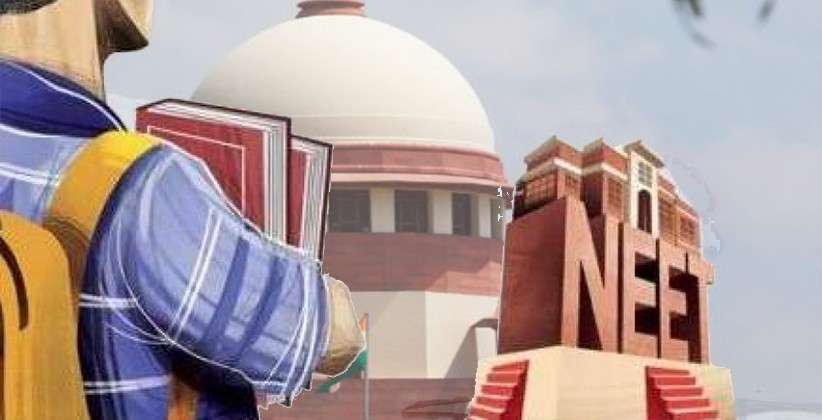 A bench of Justices Arun Mishra, Vineet Saran and M R Shah said, "Resultantly, we hold that there is no violation of the rights of the unaided/aided minority to administer institutions under Articles 19(1) (g) and 30 read with Articles 25, 26 and 29(1) of the Constitution of India by prescribing the uniform examination of NEET for admissions in the graduate and postgraduate professional courses of medical as well as dental science".

A total of seventy-six institutions petitioned at the Supreme Court regarding the Centre’s order. Some of them included Christian Medical College, Vellore, Manipal University, SRM Medical College Hospital, and Karnataka Private Medical and Dental Colleges Association.

As per the ruling, considering that NEET is the first step to weed out the evils from the system, it would not be in the national interest to step back considering the overall scenario and “if we revert to the old system, posterity is not going to forgive us".

It was further noted that provisions of the Indian Medical Council Act, 1956, and its regulations are not ultra vires and t they do not take away the rights guaranteed to the aided and unaided minority institutions under the various provisions of the Constitution.

The bench while disposing of petitions said, “Regulatory measures cannot be said to be exceeding the concept of limited governance. The regulatory measures in question are for the improvement of the public health and is a step, in furtherance of the directive principles enshrined in Articles 47 and 51(A) (j) and enable the individual by providing full opportunity in pursuance of his objective to excel in his pursuit."

The court also stated that regulatory measures are intended for the proper functioning of institutions and to ensure that the standard of education is maintained and does not fall low under the guise of an exclusive right of management to the extent of maladministration.

It noted, "The charitable activity of education became a saleable commodity and prerogative of wealthy persons and poor students were forced to get education funded from Banks making it difficult for them to come out of tentacular octave of interest. They are exploited in the bud before they bloom into flower. The ill-reputation developed by MCI forced to change its entire structure. The situation is still grim and requires to be dealt with a firm hand and steely determination".

Rejecting the submissions by the some of the petitioner minority institutions, that it was open for them to impose higher standards of merit, it said that when it comes to national standards and the objects sought to be achieved by NEET, to conduct individual examinations by some institutions cannot be permitted.

"The system is not yet out of clutches of unscrupulous devices and dubious means are adopted to defeat merit, the interest of education would further suffer, and very purpose of centralized examination would be defeated. It is not possible to prescribe further examination over and above NEET that cannot be said to be workable, no exemption can be granted from NEET, considering the objective with which it has been introduced.", the ruling read.

The Court relied upon several apex court judgments including a constitution bench verdict of 2002 in TMA Pai Foundation and said that "Thus, we are of the opinion that rights under Articles 19(1) (g) and 30 read with Articles 25, 26 and 29(1) of the Constitution of India do not come in the way of securing transparency and recognition of merits in the matter of admissions...It is open to imposing reasonable restrictions in the national and public interest" while further adding, "Uniform entrance test qualifies the test of proportionality and is reasonable. The same is intended to check several maladies that crept into medical education, to prevent capitation fee by admitting students which are lower in merit and to prevent exploitation, profiteering, and commercialization of education".

It was clarified that minority institutions are equally bound to comply with conditions imposed under the relevant Acts and Regulations to enjoy affiliation and recognition by stating, "…To weed out evils from the system, which were eating away fairness in the admission process, defeating merit and aspiration of the common incumbent with no means, the State has the right to frame regulatory regime for aided/ unaided minority/private institutions as mandated by Directives Principles, Articles 14 and 21 of the Constitution."

The Constitutional Provisions relied upon in the above case are summarized as follows:

Article 14 in the Constitution of India 1949 - Equality before the law:

The State shall not deny to any person equality before the law or the equal protection of the laws within the territory of India Prohibition of discrimination on grounds of religion, race, caste, sex or place of birth.

Article 19(1) (g) in the Constitution of India 1949- Protection of certain rights regarding freedom of speech etc.:

To practice any profession, or to carry on any occupation, trade or business

Article 21 in the Constitution of India 1949- Protection of life and personal liberty:

Article 25 in the Constitution of India 1949- Freedom of conscience and free profession, practice and propagation of religion:

(1) Subject to public order, morality, and health and the other provisions of this Part, all persons are equally entitled to freedom of conscience and the right freely to profess, practice and propagate religion

(a) Regulating or restricting any economic, financial, political or other secular activity which may be associated with religious practice;

(b) providing for social welfare and reform or the throwing open of Hindu religious institutions of a public character to all classes and sections of Hindus Explanation I The wearing and carrying of kirpans shall be deemed to be included in the profession of the Sikh religion Explanation II In sub-clause (b) of clause reference to Hindus shall be construed as including a reference to persons professing the Sikh, Jaina or Buddhist religion, and the reference to Hindu religious institutions shall be construed accordingly

Article 26 in the Constitution of India 1949- Freedom to manage religious affairs: Subject to public order, morality and health, every religious denomination or any section thereof shall have the right

(a) To establish and maintain institutions for religious and charitable purposes;

(b) To manage its own affairs in matters of religion;

(c) To own and acquire movable and immovable property; and

(d) To administer such property in accordance with law

Article 29 in the Constitution of India 1949- Protection of interests of minorities:

(1) Any section of the citizens residing in the territory of India or any part thereof having a distinct language, script or culture of its own shall have the right to conserve the same

(2) No citizen shall be denied admission into any educational institution maintained by the State or receiving aid out of State funds on grounds only of religion, race, caste, language or any of them

Article 30 in the Constitution of India 1949- Right of minorities to establish and administer educational institutions:

(1) All minorities, whether based on religion or language, shall have the right to establish and administer educational institutions of their choice

(1A) In making any law providing for the compulsory acquisition of any property of an educational institution established and administered by a minority, referred to in clause (1), the State shall ensure that the amount fixed by or determined under such law for the acquisition of such property is such as would not restrict or abrogate the right guaranteed under that clause

Article 47 in the Constitution of India 1949-Duty of the State to raise the level of nutrition and the standard of living and to improve public health:

The State shall regard the raising of the level of nutrition and the standard of living of its people and the improvement of public health as among its primary duties and, in particular, the State shall endeavor to bring about prohibition of the consumption except for medicinal purposes of intoxicating drinks and of drugs which are injurious to health

Article 51A in the Constitution of India 1949- Fundamental duties :

It shall be the duty of every citizen of India:

(j) To strive towards excellence in all spheres of individual and collective activity so that the nation constantly rises to higher levels of endeavor and achievement.