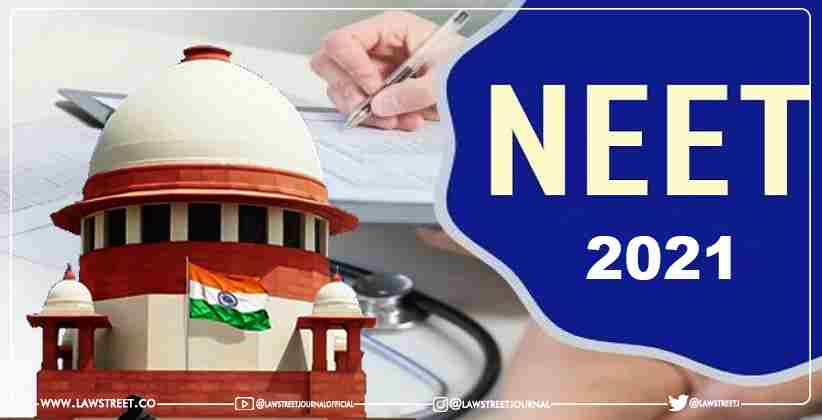 On September 30, 2021 (Thursday), the Supreme Court issued an interim order allowing Overseas Citizens of India (OCI) candidates to participate in NEET-UG counselling in the general category for the year 2021-22.

The interim order was issued in response to a writ petition filed by OCI candidates challenging a notification issued by the Minister of Home Affairs to treat them on par with Non-Resident Indians (NRI) for college admissions.

The court ordered the National Testing Agency (NTA) to declare the results of OCI candidates and allow them to participate in general category counselling. The court clarified that the order is only valid for the academic year 2021-22.

The following order was issued by a bench of Justices Abdul Nazeer and Krishna Murari:

“We are of the view that at least for the current academic year 2021-2022, the petitioners are entitled to be considered eligible for all the medical seats which the OCIs were eligible for before the issuance of the impugned notification dated March 4, 2021. Therefore, we direct the NTA to declare the result of the examination taken by the petitioners NEET UG 2021 and the eligible petitioners are permitted to appear for the counselling in the general category. This order is confined to the academic year 2021-2022.”

“Our only objection is that you can take some time to take the decision. We might not have any objection subject to what is stated is that time is taken to apply this. All of a sudden this change, we don't know what their condition is,” Justice Krishna Murari added.

The petitioners were represented by Senior Advocate Vikas Singh.

The challenge was against the system of dual citizenship in the Constitution of India, Section 9 of the Citizenship Act, and the Notification of March 4, 2021, according to Additional Solicitor General Aishwarya Bhati, sitting for the Centre.

She further claimed that objections to the constitutionality of section 9 of the Citizenship Act had been heard, and that the Court had upheld it in various judgements.

She added, “There are several conditions upon which a person becomes OCI's but they are not Indian citizens in terms of constitution & the Foreigners Act. But they have a special privilege. There are large citizens who do not have access to resources of their country. OCI card holders have benefits even in terms of taking citizenship.”

On October 20, 2021, the Court will hear the remaining concerns mentioned in the petition.

The writ petition challenges the Ministry of Home Affairs' notification dated March 4, 2021 ("impugned notification"), which treats Overseas Citizens of India on an equal footing with Non-Resident Indians when it comes to All India Entrance Tests like NEET, JEE (Mains), JEE (Advanced), and other admissions tests.

The petition also sought for declaration that the clause 4 (ii) of the notification dated March 4, 2021 ("impugned clause") be declared ultra vires Articles 14 and 21 of the Indian Constitution insofar as it fails to provide resident Indian OCIs with parity with resident Indian citizens in all matters of entry and admission to professional colleges in India from 2021-2022 onwards.

It also asked the court to strike down paragraph 4.2.3 of the NEET UG Information Bulletin for Admission to Undergraduate Medical Courses, which states that OCIs are ineligible for admission to any seat reserved exclusively for Indian citizens and requires OCIs to provide their passport number/citizenship certificate number as proof of identity.