Home Judiciary New Brides not taking the endeavor for household chores or not willing for a physical alliance not to be counted as intentional cruelness: Delhi HC
Judiciary 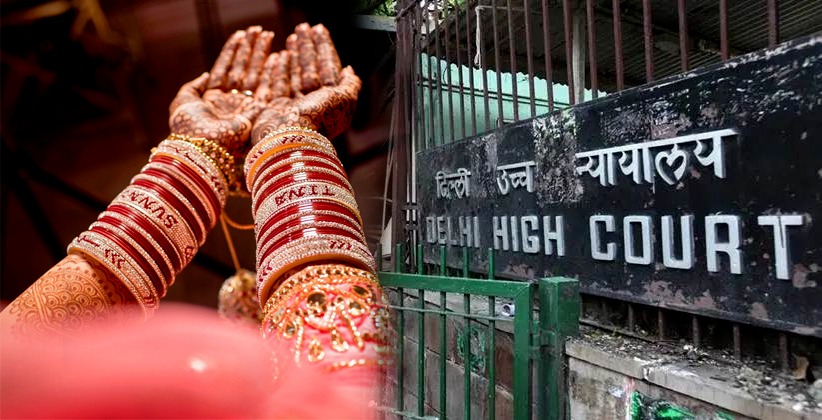 The division bench of justices Hima Kohli and Asha Menon was hearing the Appellant- husband being aggrieved by the order by the judgment dated 30th August 2019 of the Family Court, Dwarka. The petition was dismissed by the court who was seeking dissolution of marriage with the Respondent No. 1 under section 13(1)(i) and (ia) of the Hindu Marriage Act, 1955. The Delhi High Court observed that “such conduct of the respondent-wife of being interested in remaining in her room or not showing initiative in doing household work can be by no stretch of imagination be described as cruel behavior and that too upon the appellant/husband”.

The court noted that “cruelty” amounts to different to every different individual and differs from person to person. This has been the subject matter of several decisions of the SC.

The Affidavit filed by the Appellant-husband stated several acts of cruelty by the Respondent-wife and it was difficult for the court that what impacted him as cruelty. The judgment narrates that the accused the Respondent No. 1-wife of having been (i) ‘rude’ and of a ‘cruel behavior’ immediately after the marriage; (ii) of her picking up quarrels with every family members on trivial matters; (iii) of her refusal to have any physical relations with him immediately after the marriage; (iv) of locking herself in the room to be requested several times to come and participate in the muh dikhai ceremony; (v) of looking nervous and unhappy at the marriage reception on 1st December 2012; (vi) of keeping herself to her room, showing a disinclination to do any household work or cook food.

The Court said that there were no “cruel acts” seen by the court and none of them would tantamount to ‘cruel conduct’. The bench further stated that it is the duty of the husband’s family to make the bride feel at home as she is new and hesitant about the people and environment around her.

Moreover, the bench said that adultery could have been committed only after marriage and there was no record of anything like that. So allegation of adultery on the ground that before the marriage of the parties, the respondent had stayed together is completely meaningless.

“It is thus clear that the learned Family Court had arrived at the right conclusion including observing that the accusations of adultery heaped by the Appellant-husband on the Respondent-wife are without any proof whatsoever of the respondents living in adultery and having an illicit relationship either before or post the marriage of the parties and the Respondent No. 1-wife had treated the Appellant-husband with any cruelty”, held the bench.

However, the court appreciated the fact that the Appellant-husband had “reconciled” with the Respondent No.1-wife and had hoped for a “bright future” and had “saved his matrimonial life”.

The High Court finally said while dismissing the appeal “In other words, whatever “misconduct” that the appellant/husband had noticed and alleged, as delineated hereinabove, stood condoned by him, leaving him no scope for him to have filed the petition before the court for dissolution of the marriage between the parties either on the grounds of cruelty or adultery”.