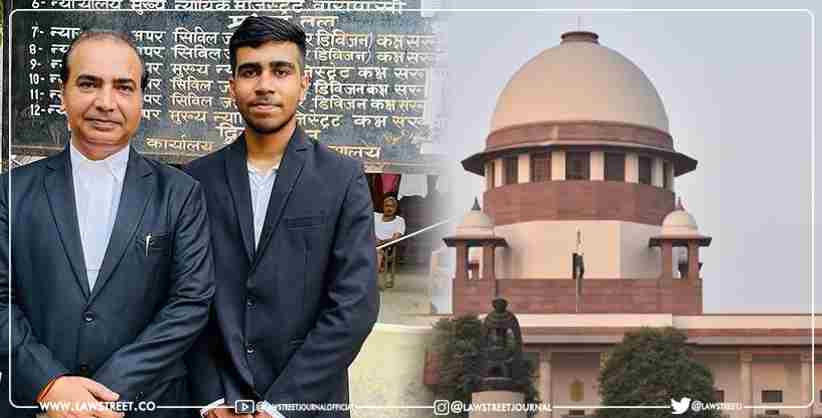 Nikhil Upadhyay, the son of the renowned PIL man of India, Adv. Ashwini Upadhyay, has filed an application in the Hon'ble Supreme Court in the Article 370 case. 5th semester law student Nikhil has filed an intervention petition requesting the court to hear his arguments. The application has been filed through Advocate-on-Record Ashwani Kumar Dubey on behalf of the applicant. (Radha Kumar & Others vs Union of India & Another)

The applicant (Nikhil Upadhyay) is sincerely and seriously interested in the unity and national integrity and firmly believes that J&K is an integral part of India. He believes that Article 370 was intended to be a temporary, transitional and special provision and was not meant to be permanent. In fact, Article 370 contains within itself the mechanism of its erosion. It provides the route for the full and complete integration of J&K with India and its own redundance.

● All the instruments of accessions were executed qua India under the India (Provisional Constitution) Order, 1947 which was issued as per Section 8 of the Indian Independence Act, 1947 read with the Government of India Act, 1935. These Instruments enable the execution of an Instrument of Accession by the Ruler of an Indian State. The Government of India Act, 1935, vide Section 5 and 6 thereof, contemplated the joining of Indian Federation ( Pre-Partition ) comprising the Governors Provinces and Indian States. The Rulers were to execute an Instrument of Accession. Proviso to Section 6(1) envisaged conditional Accession. However, this Proviso was dropped in the India (Provisional Constitution) Order, 1947 [ IPC Order]. Hence, post independence there could not be a conditional execution of the Accession Instrument.

● Both the Government of India Act, 1935 and the IPC Order, 1947 contemplated specification of matters which the Ruler accepted as matters with respect to which the Federal or Dominion Legislature may make laws for the State and limitations in that regard, and also as regards exercise of executive authority in relation to that state. It is necessary to state that Specification of matters in the instrument of Accession does not make Accession conditional. That is an issue of federal distribution of powers.

● It is beyond any pale of doubt that at the time of its drafting, the intent behind incorporating a special provision for the State of Jammu and Kashmir was necessitated in light of the then prevailing social political conditions, and more relevantly the Instrument of Accession as entered into between the Union of India and the then Ruler of the State.

● A Special Constitution for the State of Jammu and Kashmir redundant and expendable, a curious anomaly has arisen which potentially shakes the foundational principle of Article 370 being a ‘temporary provision’. The smooth extension of the Constitution of India to all its federal units being the intent of the framers of the Constitution behind enacting this particular Article, which per necessity is a temporary and transitional mandate, the provision was thus provided with a sunset clause/condition in Article 370(3). Thereby the President of India was empowered to inter alia declare the particular provision i.e., Article 370 to cease to be operative. However, the said power was hedged by the proviso to the Article, where under, the President could exercise the said power granted in the principal provision of Article 370(3) only upon a recommendation to that effect by the Constituent Assembly of J& K.

● It direct effect of the above is that through this backhanded sleight, an attempt is sought to be made to evergreen the provision of Article 370, which is anomalous for the many reasons:

( i ). It curtails the wide powers of the President to exercise her powers under Clause (3) of Article 370;

( ii ). The proviso is thus made to govern the principle provision, that is to say, it creates the anomalous circumstance whereby, by rendering the proviso otiose, the substantive power under main clause i.e., Article 370(3) has been put in cold storage in perpetuity; and

( iii ). Eternal perpetuation of a provision through a sleight, when the said provision was mass ex facie intended to be temporary is a massive fraud on the Constitution of India. (refer of India , AIR 1987 SC 579)

● Each of the above mentioned grounds shakes the structural sanctity of the Constitution of India, in connection with the relationship that the Centre shares with the constituent States of the Union. That having done away with Article 238 of the Constitution of India, there is no discernible rationale sans any other textual indication in the Constitution itself for having different categories of the States within the Union. Of course, it is admitted, that the decision to exercise the powers under Clause (3) to Article 370 shall rest upon the executive wisdom which in turn shall be predicated on social and political necessities, the power however, must remain reposed with the President and the same cannot be denuded through the medium of the proviso to that provision.

● In its present form, Part XXI of the Constitution of India contains three types of provisions, (i) temporary ones e.g., Articles 369, 370 and 373; (ii) transitional ones - e.g., Articles 369, 372, 373, 374, 375, 376, 377, 378 and 392; and (iii) special ones - e.g., Articles 371, 371 A-J and 378A. It is noteworthy, that the Part as was adopted in 1950 only contained temporary and transitional provisions. It is in this matrix, the legislative history of the provision elucidates that Article 370, as originally promulgated was only a temporary provision and was never meant to be an everlasting and eternal special provision. It cannot be countenanced that while multiple amendments have been effected to the Part by the Parliament, the provision of Article 370 has been retained without material alteration and therefore, there cannot be an implicit interpretation that Article 370 has now converted itself into a ‘Special Provision’. The provision itself with its nuances and the history of Constitutional Orders issued under it, undermines any such interpretation and the same necessarily has to be eschewed.

● The constitutional structure is so envisioned that all its provisions are intended to play in a symphony o f the individual notes that independent provisions strike. When a limb of the government in exercising its powers, seeks to use any provision in a manner which is designed to circumvent constitutional safeguards and when it seeks to operate the constitution in a manner, which is contrary to and in direct collision of the original course, the same has to be regarded as a fraud on Constitution of India.

● Under the provisions of the Constitution of  India, the power of the President i.e., the Executive powers are widely bestowed. In fact, our judicial precedents have repeatedly clarified that it is impossible to frame an exhaustive definition of what executive function means and implies. In fact in Ram Jawaya Kapur v. State of Punjab , (1955) 2 SCR 225, this Hon’ble Court had opined that "executive power connotes the residue of governmental functions that remain after legislative and judicial functions are taken away”

● The Hon'ble Court may graciously be pleased to issue a writ, order or direction including a writ of mandamus to declare that proviso of Article 370(3) lapsed with the dissolution of J & K Constituent Assembly, dissolved on 26.01.1957 and/has been restricted to directory only / not mandatory.

● It is also respectfully prayed to declare all such provisions of “Delhi Agreement 1952” viz. clause II etc. which are inconsistent with/in derogation of the provisions of the Constitution of India, void, illegal inoperative, unconstitutional and quash the same.

The applicant prays that,

FIR Against Nupur Sharma: Know how 295A is not applicable.