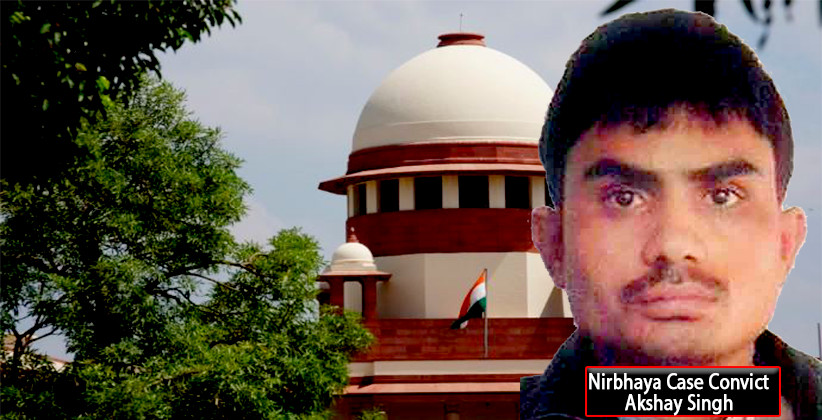 The Supreme Court today had reserved it's order on a review plea filed by one of the death convicts in Nirbhaya gangrape-cum-murder case and said that it would pronounce the order today at 1 pm. Solicitor General Tushar Mehta appeared for the Delhi Police, saying that convict Akshay is a monster and it was a crime where humanity cried. He added that it was a fit case to hand out death penalty falling under the category of the rarest of rare cases.

A Bench comprising of Justices R. Bhanumathi, Ashok Bhushan and A S Bopanna was hearing the review petition of the convict. The Bench dismissed the review petition thereafter while the convict Akshay’s lawyer sought 3 weeks’ time to file a review petition before the President of India. Tushar Mehta representing Delhi Police pointed out that the time prescribed by law was 7 days, which is what would be available to the convict agreed R. Banumathi.

Convict Akshay's Lawyer AP Singh had argued saying, “Death penalty is against the human rights and is symptom of anti-Indian culture. We are living in Delhi and the air condition is like gas chamber, why give death penalty? Only in this case, the Delhi Government is interested in execution but the death row convicts in previous cases are still there. Everything is happening like a political agenda.”

Justice Ashok Bhushan said in reply that, “These evidences were not there during trial. If we rely on a book written by somebody, then there would be no end to any case. It will be a dangerous trend, if a book is released after the trial is over. AP Singh is citing the book written by Sunil Gupta, the then law officer in Tihar jail when Akshay was there, in which it was said that main convict Ram Singh was murdered but had not committed suicide, these allegations comprise of many new facts.”

“There Is A Need To Publicize Why The Act Was Passed” Says SC Refusing To Stay CAA, 2019