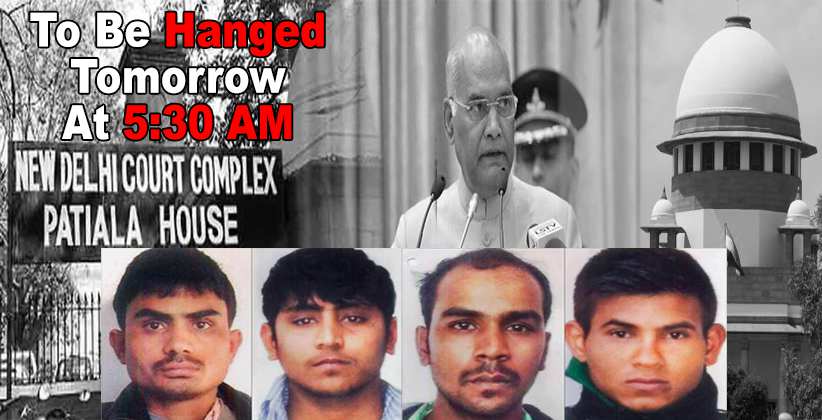 The convicts in the Nirbhaya Case are set to be executed tomorrow, that is March 20, 2020 in Tihar Jail.

A plea seeking stay on the execution of the four convicts was rejected today (March 19, 2020).

The Nirbhaya convicts had challenged Delhi court's refusal to stay execution. Delhi's Patiala House Court refused to stay the death warrants issued for the four convicts. The convicts had further argued that the execution should be stayed as they had various pleas pending before courts. The President has rejected Pawan Gupta's second mercy plea. The Supreme Court has dismissed pleas of two convicts on their mercy petition rejection.

AP Singh, the lawyer for the four accused, has contended that there has been a bias and non-application of mind by the government when they proposed the death sentence for Nirbhaya convicts.

"They are using the life of the death row convicts for politics. Use their life.. send them to the border of Pakistan or China but don't hang them. Will hanging them reduce rape? After 1-2 years everyone will forget the case but the families will be destroyed. Let them be in jail, use them for medical trials, send them to the border," he said.

The Apex Court had dismissed a second curative petition filed by Pawan Gupta, one of the four convicts in the Nirbaya case.