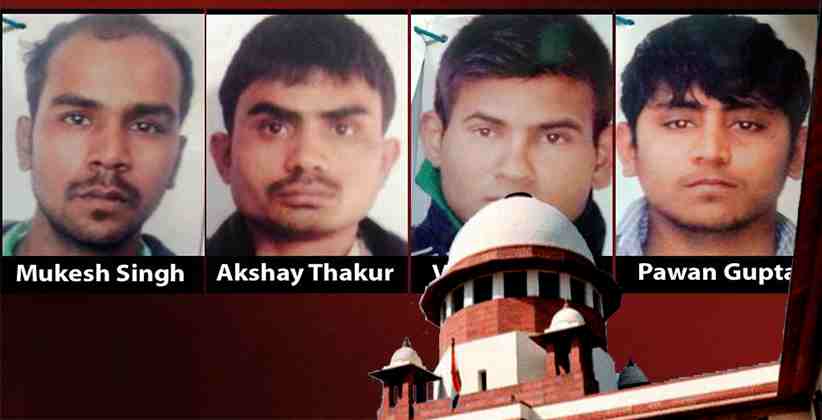 Nirbhaya gang rape and murder case convict Mukesh  Singh has moved a plea in the Supreme Court today (January 27, 2020) against the rejection of his mercy plea by the President of India. President Ram Nath Kovind rejected the mercy plea of Mukesh on 17th of January, 2020. All the four convicts are fated to be executed on  February 1, 2020 at 6 am.

The public prosecutor appearing for Tihar Jail Authorities called it nothing but a ‘delaying tactic'. Inititally their execution date was 22nd January 2020 but they applied for a curative petition in the eleventh hour which forced the court to shift their execution date to 1st of February 2020.

The advocate appearing for two of the convicts, had moved the Patiala House Court earlier with a plea that the Authorities of Tihar Jail were intentionally causing a delay in handing over the necessary documents which they allegedly needed for filing mercy petitions.

Advocate AP Singh had also moved an application claiming that the Tihar Jail Authorities were not even handing over the documents required for filing curative petitions of convicts Akshay Kumar Singh and Pawan Singh.

The Patiala House Court had said that the plea filed by the counsel of the convicts requires no further directions. The counsel representing Tihar Jail Authorities told the court that they had supplied all the required documents asked by the lawyer. He further added that “The convicts are adopting delaying tactics by filing these applications. The entire process is to defeat the law. We have already supplied all the documents. We procured all the documents from all the jails where they went,".

Advocate AP Singh also alleged that Vinay was slow poisoned by the authorities and was taken to a hospital in the past but his medical records were not supplied. He said that he had received incomplete documents from the authorities and Vinay's personal diary and medical reports were missing.

He also asked for the paintings made by Vinay during his time in prison with the intent of attaching them with his Mercy Petition to be presented to the President for consideration. In this regard he said, “Vinay made several paintings and we want to inform the President about it. Also, what he earned from those paintings needs to be informed."