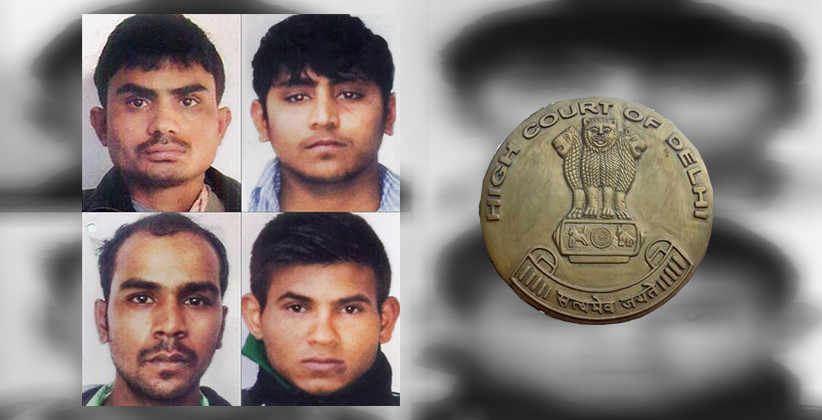 The Centre told the Delhi High Court today (February 2, 2020) about the misuse of law by the convicts, it added that the court should consider the possibility of separate hangings of the condemned convicts in the Nirbhaya rape and murder case.

The Delhi High Court is hearing  the plea filed by the Centre challenging the stay issued by the Patiala Hous Court of Delhi on the hanging of the four convicts in the 2012 Nirbhaya gangrape and murder case.

Solicitor General Tushar Mehta, who is appearing for the Ministry of Home Affairs (MHA), has argued that the four convicts have made deliberate attempts to cause a delay in the case. Tushar Mehta said that convict Pawan Gupta not filing curative or mercy petition is deliberate and calculated inaction, the sentence cannot be executed thus.

A single judge bench comprising Justice Suresh Kumar Kait of the Delhi High Court is hearing the pleas filed by MHA asking for the Patiala House Court order which stayed the hanging of the rapists to be quashed. Senior officials including Director General (DG) Prison, Inspector General (IG) Prison, Deputy IG Prison and Law officers of Tihar Jail are also present in the courtroom.

The Solicitor General (SG) is arguing the matter on behalf of MHA.

SG gives the court the details of the convicts' petitions:

4. Pawan - Has till date not filed a curative petition

"There is deliberate, calculated and well thought of design to frustrate the mandate of law," says SG.

SG says that the convicts cannot be hanged separately only during the time when judicial proceedings are ongoing. Once Supreme Court decides the fate of all convicts in finality, there is nothing barring them from being hanged separately. The Delhi Prison Rules say that in case of co-convicts, the convicts have to be hanged together only if an “appeal or application” is pending. This “appeal and application” does not include mercy petitions. They are separate and cannot be included in this. One co-convict by his mere calculated inaction, acting in tandem with others, he can frustrate the order of the court, the interest of the society and interest of the victim.

He adds that "mercy jurisdiction is always a personal jurisdiction. The President may show mercy towards one convict because of his circumstances. Maybe he has a minor child, maybe he is paralytic, maybe he is mentally unstable. How will that be applicable to other convicts? Look at what happened in Telangana, the accused were encountered and people celebrated. It was not the celebration of the police, it was the celebration of justice. "People losing faith in the judicial system due to the delays. The convicts are testing the patience of the country. It was a crime that shook the country. It was a devilish and inhumane crime."

The SG tells the Delhi HC, "Consider rule number 858. There's a provision that after a death warrant, 14 days time has to be given to the convicts. They are misusing this provision. Someone files a plea on the 13th day." On this point SG concluded his arguments.

"The way of interpretation is different for the Solicitor General. He submitted Telangana and Karnataka to support his argument. I will cite the jail rules."

"There is no time limit for the mercy petition prescribed in the law. The 14-day period is provided to the prisoner to settle his affairs or avail of any remaining judicial remedies."

Senior Advocate Rebecca John begins arguments for convict Mukesh. John says MHA’s plea is not maintainable and that the MHA has moved an application before the SC seeking clarification of the same thing that they are asking for from the HC - for the convicts to be hanged separately.

John says- from 2018 right up till Jan 31 2020, the MHA was not a party to the proceedings in the Nirbhaya case. "It is only now that they have superimposed themselves into these proceedings." "Why have they done that?"  "It’s for the Court to examine."

John says, "even death row convicts who are guilty of the most heinous crimes have rights. That’s the only reason I’m standing here and arguing for them and A death row convict will use every legal remedy available to him till his last breath because that is his right and no body can stop him. Dismiss me, disregard me, hang me, I will use every right that the Constitution gives me."