Home Judiciary No closure of facility for lack of prior environmental clearance: SC [Read Order]
Judiciary

No closure of facility for lack of prior environmental clearance: SC [Read Order] 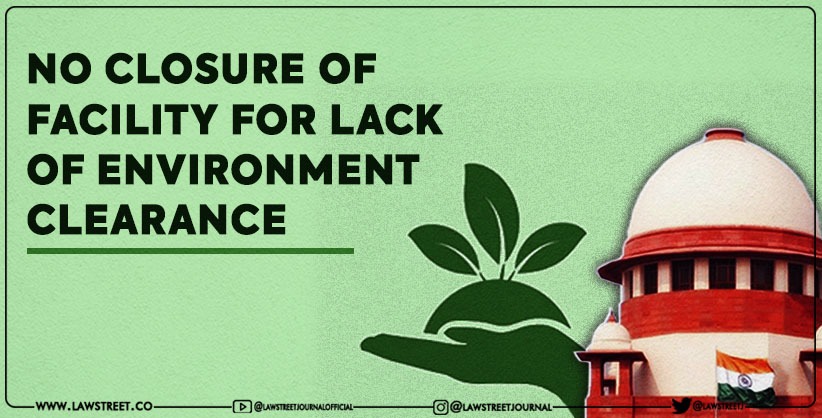 NEW DELHI: The Supreme Court has on Thursday said that a running facility can't be closed on the ground absence of environmental clearance in view of larger public interest, including impact on livelihood, as Environment Protection Act does not prohibit ex post facto approvals.

The top court declined a plea for closure of a Bio-Medical Waste Treatment Facility in Mysuru only due to lack of prior environmental clearance, saying it would go against the public interest.

“Ex post facto EC should not ordinarily be granted, and certainly not for the asking. At the same time ex post facto clearances and/or approvals cannot be declined with pedantic rigidity, regardless of the consequences of stopping the operations,” a bench of Justices Indira Banerjee and J K Maheshwari said.

The court dismissed an appeal filed by advocate Sanjay M Nuli on behalf of Mysuru resident, D Swamy against May 10, 2017 order by the National Green Tribunal, Southern Zone, Chennai.

The green panel had rejected the application filed under the National Green Tribunal Act 2010 against the facility on account of absence of prior environmental clearance.

"This court cannot lose sight of the fact that the operation of a Bio-Medical Waste Treatment Facility is in the interest of prevention of environmental pollution. The closure of the facility only on the ground of want of prior environmental clearance would be against public interest,” the bench said.

The appellant pleaded for closure of the Common Bio-Medical Waste Treatment Facility run by a private firm, on the ground of alleged non-compliance of the provisions of the Environmental Impact Assessment Notification 2006, as amended on April 17, 2015.

The court said the NGT rightly found that when the facility was being operated with the requisite consent to operate, it could not be closed on the ground of want of prior EC.

Relying upon a previous judgment, the bench said this court cannot be oblivious to the economy or the need to protect the livelihood of hundreds of employees and others employed in the units and dependent on the units for their survival.

"Some relaxations and even grant of ex post facto EC in accordance with law, in strict compliance with Rules, Regulations, Notifications and/or applicable orders, in appropriate cases, where the projects are in compliance with environment norms, is not impermissible,” the court said.

However, the bench emphasised ex post facto environmental clearance should ordinarily not be granted routinely, but in exceptional circumstances taking into account all relevant environmental factors.

“To protect future generations and to ensure sustainable development, it is imperative that pollution laws be strictly enforced. Under no circumstances can industries, which pollute, be allowed to operate unchecked and degrade the environment,” the top court clarified.
[Read Order]