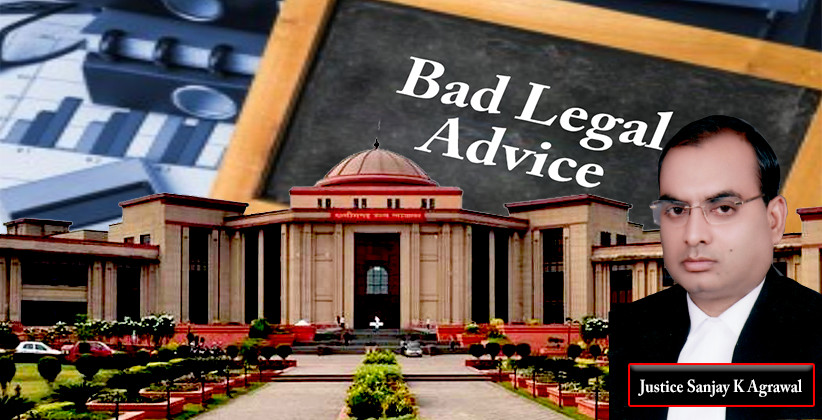 The Chhattisgarh High Court in the case of Subha Jakkanwar v. State of Chhattisgarh Criminal Writ Petition No. 1614 of 2017 on November 26, 2019 held that an advocate cannot be held criminally liable for rendering negligent legal advice especially if there is no proof of his/her direct involvement in any criminal activity.

A Single Judge Bench of Justice Sanjay K Agrawal was hearing a petition filed by one Ms. Subha Jakkanwar seeking to quash the First Information Report filed against her. The petitioner was sued on the basis of allegedly issuing false non-encumbrance certificates in respect of credit facilities made available to certain farmers on requisition by the Pulgaon Chowk Branch of the Dena Bank.

On finding that the certificates were false by the bank, reportedly the empanelled advocate was sued for being involved in cheating and conspiracy along with the defaulting farmers and borrowers. The opposition argued that the advocated could not be exempted totally from any liability because she had issued false non-encumbrance certificates.

The court taking note of the fact that an advocate is expected to work in the interest of the client especially in the banking sector, held that, “It is well-settled law that extending of a legal opinion for granting loan has become an integral component of an advocate's work in the banking sector. A lawyer, on his part, has a responsibility to act to the best of his knowledge and skills and to exhibit an unending loyalty to the interest of his clients. He has to exercise his knowledge in a manner that would advance the interest of his clients. However, while acting so the advocate does not assure to his client that the opinion so rendered by him is flawless and must in all possibility act to his gains.”

The court citing the judgment of the Apex Court in Surendra Nath Pandey & Ors. v. State of Bihar & Ors.held that, “it is quite vivid that an advocate while performing his professional duties cannot be held liable for offence in regard to which no direct evidence has been adduced against him and as held in K. Narayana Rao's case (supra), liability in criminal law against an opining advocate arises only when an advocate is active participant in a plan to defraud the Bank, merely because his opinion may not be acceptable, he cannot be criminally prosecuted, particularly, in the absence of direct evidence against him.”