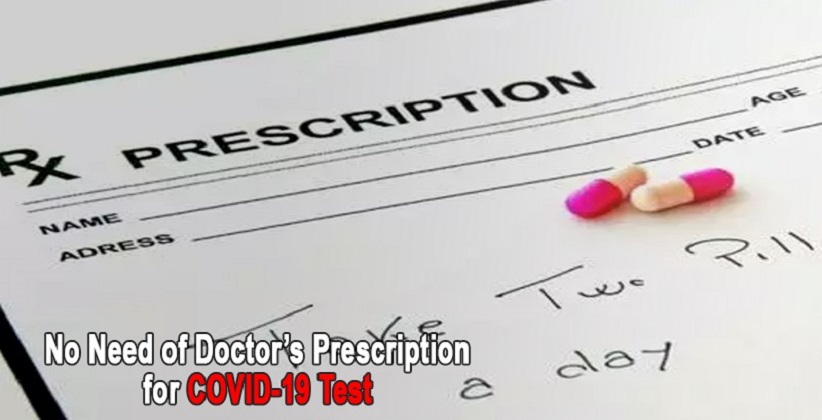 A brief Status Report was filed by the ICMR placing on record the latest Testing Advisory issued on 04.09.2020. The highlight of the said Advisory was that ICMR has for the first time, recommended testing on demand for all individuals undertaking travel to other countries, Interstate, wherever a negative COVID-19 test is mandated at the point of entry, as also testing by all individuals who wish to get themselves tested.

Ld. ASC Mr. Satyakam filed a petition seeking to completely do away with the necessity of prescription from a doctor for the COVID-19 test.

He states that “though the Delhi Government was directed to examine as to whether the necessity of obtaining a prescription from a private doctor for persons who wish to undergo the RTPCR test should be made mandatory/optional or be completely done away with, the same is being mulled over and some more time is required in that regard.”

The bench comprising of Justice Hima Kohli and Justice Subramaniam Prasad after examining the report said that “Keeping in mind the spike in the number of COVID-19 cases in Delhi, this court is of the opinion that the situation does not brook any further delay. Therefore, while providing a buffer of additional 2,000 RT- PCR tests besides 10,000 tests to the Delhi Government from out of a total testing capacity of 14,000 through RT-PCR (private sector and public sector combined), it is directed that henceforth, any resident of Delhi who wished to get tested at his/her own expense through RT-PCR for COVID-19 infection, need not produce a prescription from a doctor. The person

The aforesaid tabulated statement reveals that besides focusing on concerned would only be required to fill-up the form prescribed by the ICMR and produce the Aadhaar Card to establish that he/she is a resident of Delhi.”

The court also said that “Delhi Government shall also prepare a map indicating thereon, the testing facilities that have been set up all over Delhi and provide it to the DMRC for it to be displayed at prominent spots to enable commuters to access the testing sites, closest to their point of exit/entry. This map shall also be uploaded on the website of the Delhi Government for the ready reference of citizens.”

The court also directed that the Delhi Government deploy at least 4 mobile facilities for testing in each of the 11 districts, including near prominent terminals of the Delhi Metro.