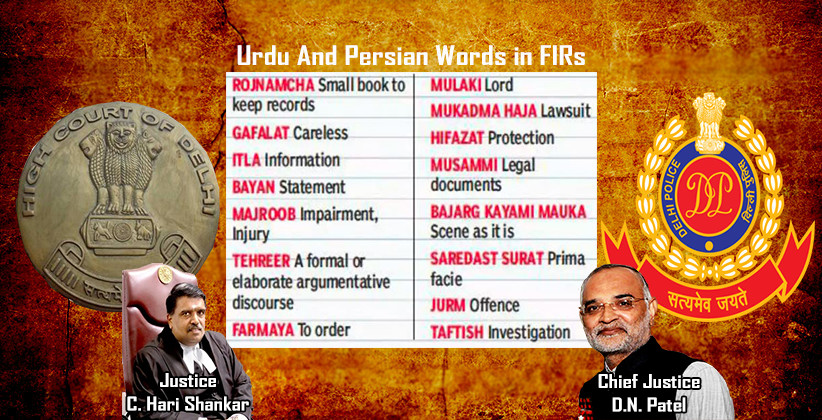 The Delhi High Court on November 25, 2019, in the case of Vishalakshi Goel v. Union of India has directed the Delhi Police to lodge FIRs in the simplest language possible and to refrain from mechanically using Urdu/Persian words.

A Division Bench of Chief Justice D.N. Patel and Justice C. Hari Shankar taking note of a circular issued by the Delhi Police Headquarter regarding the use of simpler words in place of certain Urdu and Persian words in FIRs said that the FIR should be in the language of the person who has approached the Police for lodging of FIR.

"Looking to the Code of Criminal Procedure, 1973, it appears that FIR is the most vital document prepared by Police as it sets the process of criminal justice in motion. In fact, a copy of the FIR is required to be sent to the Magistrate immediately as it is an immediate version of the narration of the whole offence. In Court, FIR is required to be read time and against, hence, it should be in a simple language or it should be in the language of a person who has approached the Police for lodging of FIR,” the Court said.

Referring to the list of 383 Urdu and Persian words translated by the Headquarters in Hindi and English in its Circular dated November 20, 2019, the Court observed that these words were being used by the Police mechanically without even knowing their meaning.

The Court has also clarified that the list supplied by the Headquarters in the Circular was not exhaustive and there were other such complex words as well. Thus, the practice of using these words in the FIR ought to be stopped by the Police, the court said.

In view of the circular, the Court directed the Police to present before it at least copies of ten FIRs registered with ten different police stations, along with a supporting affidavit, to show that the Circular is being followed in letter and spirit.