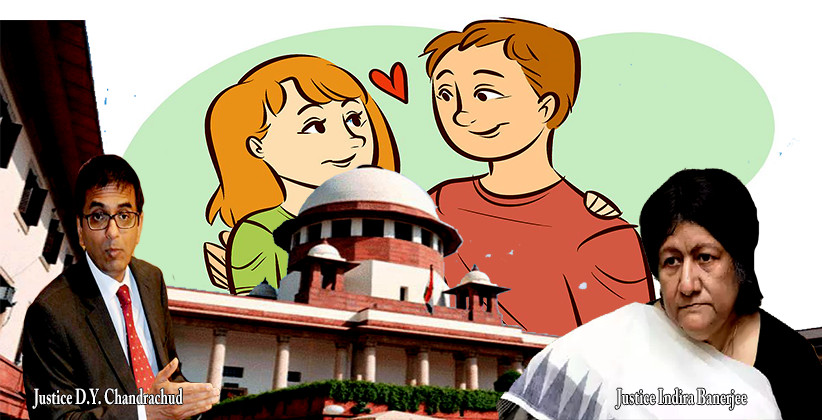 The Supreme Court on August 21, 2019, in the case of Pramod Suryabhan Pawar v. The State of Maharashtra & Anr., has held that sex is not rape on the grounds of the false promise of marriage if a woman continues to have a physical relationship with a man for a long time despite knowing that their relationship won’t result into a marriage.

A Division Bench comprising of Justice D.Y. Chandrachud and Justice Indira Banerjee held that every breach of promise to marry cannot be a false promise, making a man culpable under the rape charge if he has sexual relations with a woman.

Under the law, a man can be convicted under Section 375 (Rape) of the Indian Penal Code, 1860, if it is established that he had sexual intercourse with a woman on the pretext of a false promise of marriage. The apex court, clarifying the position in this case held that in every case a man cannot be held guilty when he fails to marry a woman despite a promise.

The court said that the prosecution must prove that the promise to marry was a promise given with no intention to honour it, and that such a promise was the only reason why a woman agreed to a sexual relationship.

The Bench made a distinction between a false promise given on the understanding by the maker that it will be broken, and the breach of a promise which is made in good faith but subsequently not fulfilled.

The Bench held that where the promise to marry is false and the intention of the maker at the time of making the promise itself was not to abide by it but to deceive the woman to convince her to engage in sexual relations, there is a “misconception of fact” that vitiates the woman’s “consent” under Section 375 of the Indian Penal Code, 1860.

“On the other hand, a breach of a promise cannot be said to be a false promise. To establish a false promise, the maker of the promise should have had no intention of upholding his word at the time of giving it. The “consent” of a woman under Section 375 is vitiated on the ground of a “misconception of fact” where such misconception was the basis for her choosing to engage in the said act,” the court said.

"The promise of marriage must have been a false promise, given in bad faith and with no intention of being adhered to at the time it was given. The false promise itself must be of immediate relevance, or bear a direct nexus to the woman’s decision to engage in the sexual act," the Bench observed.

The court added that an individual who makes a reasoned choice to act after evaluating various alternative actions as well as the various possible consequences flowing from such action or inaction, consents to such action.

The ruling has come in a matter wherein a Deputy Commandant in the CRPF had moved the apex court against the judgment passed by the Bombay High Court which declined to quash the rape FIR registered against him.

The complainant in the matter, an Assistant Commissioner of Sales Tax, had alleged that on a sham promise of marrying her, the accused had established sexual relations with her.

The Bench agreed to quash the FIR after underscoring that there is a distinction between a false promise given on the understanding by the maker that it will be broken, and the breach of a promise which is made in good faith but subsequently not fulfilled.

The Bench took into consideration the fact that the accused expressed his reservations about marrying the complainant in January 2014 because of their different castes but they still continued to engage in sexual intercourse.

"The allegations in the FIR do not on their face indicate that the promise by the appellant was false, or that the complainant engaged in sexual relations on the basis of this promise. There is no allegation in the FIR that when the appellant promised to marry the complainant, it was done in bad faith or with the intention to deceive her," it noted.

"The appellant’s failure in 2016 to fulfil his promise made in 2008 cannot be construed to mean the promise itself was false," maintained the court, adding the complainant was aware since 2008 that were issues with the duo getting married but they still continued to engage in sexual relations till 2015.

“The allegations in the FIR belie the case that she was deceived by the appellant’s promise of marriage. Therefore, even if the facts set out in the complainant’s statements are accepted in totality, no offence under Section 375 of the IPC has occurred,” the Bench held.