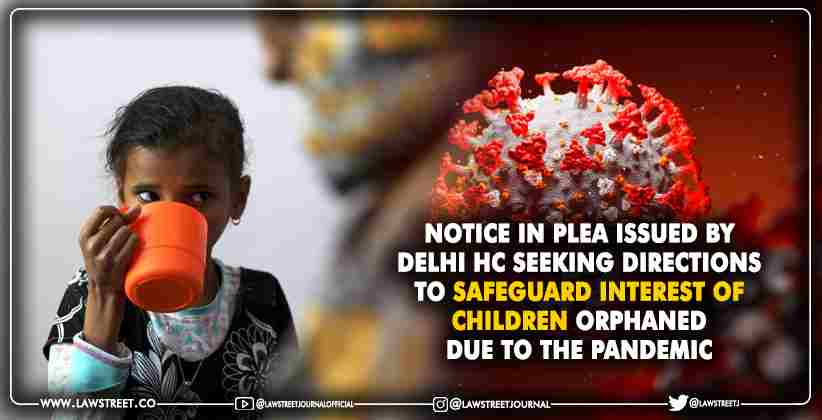 The Delhi High Court issued a notice on 10 May 2021, Monday in a petition seeking a direction to the Union of India and the Government of the National Capital Territory of Delhi to protect the interests of children who have lost their parents to Covid-19, have no one to provide for them, and are at risk of being trafficked.

A division bench comprised of Chief Justice DN Patel and Justice Jasmeet Singh sent notice to the Respondents, including the Union of India, the Ministry of Women and Child Development, the Ministry of Health and Family Welfare, the Government of the National Capital Territory of Delhi, and the Delhi Police. The note is due to be returned on June 4, 2021.

The petition, filed by Jitender Gupta, a practising lawyer in Delhi, requests that interim custody of such children be given to relatives or child care homes, while also discussing legal adoption options after thoroughly scrutinising all those who have shown interest in adopting such children.

Furthermore, the plea states that given the urgency of the situation as a result of the utter breakdown of health care facilities in the national capital, which is resulting in the loss of hundreds of lives on a daily basis, the petition was filed before the Delhi High Court to ensure the safety and well-being of these children.

The petition claims that the respondents failed to fulfil their constitutional obligation to secure the general public's life and personal liberties, and that no action was taken to protect the interests of the children who lost their parents to Covid-19.

The Petitioner has also requested financial benefits for the families of those people who died as a result of a lack of access to proper health care. In another development, the same Bench today released a PIL demanding ex gratia payments of Rs. 1 Crore and Rs. 50 Lakhs to the kin of judicial officers and members of the court staff, respectively.

"Our Humble Kanji Is Being Charged at Rs.1300" : Kerala High Court giving strong warning to private hospitals for overcharging on Covid-treatment rates